The government spent Rs230 million on buildings for squatters. Nobody moved in.

The empty, eerie housing project in Ichangu Narayan is a symptom of a haphazard, rushed decision-making.

From a distance, the buildings look grand, similar in style to the dozens of housing colonies that have sprung up across the Valley in the past decade. On closer inspection, signs of abandonment come into view: fading paint, mouldy ceilings, and hastily plastered cracks on the walls. There’s no electricity, no running water and no occupants.

Nearly five years after completion, the housing complex in Ichangu Narayan, built to house squatter families, remains vacant, except for the ground floor where a ward office and temporary police unit have taken up residence.

“Even I am curious to know what happened to this project,” said Ram Chandra Lama, Ward 1 chair of Nagarjun Municipality, who has been operating his office from the ground floor of one of the buildings. “It looks like the government just built a massive structure and abandoned it.”

According to Lama, the place was in a worse condition before the ward office moved into the building two years ago.

“It was like a mini jungle—there were overgrown weeds everywhere, and the place was littered with used syringes,” he said. “We cleaned it all up.”

In May 2012, the Baburam Bhattarai government conducted a massive demolition drive, evicting hundreds of families who had been living in squatter settlements along the Bagmati river.

Mobilising nearly a thousand personnel from the Armed Police Force and Nepal Police, the government razed over 250 squatter huts in Thapathali on May 12, 2012, leaving nearly 1,000 people homeless, including 400 children.

The government action was widely condemned by rights bodies and civil society organisations. Many groups, including Human Rights Watch, had previously written to the government, expressing concern over the planned evictions.

Following the backlash, Bhattarai visited the families—a week after the demolitions—and offered them Rs 15,000 as immediate relief, and promised to arrange alternative housing for them.

That’s when the Ichangu Narayan Housing Project for Squatters and the Urban Poor began. While the idea for the project had been devised much earlier, as part of a government effort to resettle informal settlers, the widespread condemnation of the government acted as a catalyst to speed up housing construction.

“The objective was to provide housing to those families who lost their homes in the government crackdown,” said Bhai Kaji Tiwari, development commissioner at the Kathmandu Valley Development Authority.

Between 2010 and 2012, the Department of Urban Development and Building Construction purchased over eight ropanis of land from the Ichangu Narayan Land Pooling Committee. The deal is estimated to have cost the government over Rs110 million.

Construction began in July 2012 and was completed in September 2014, according to documents provided to the Post by the department. In total, the project, which spreads across two locations in Ichangu Narayan and includes 227 housing units, cost an estimated Rs120 million.

But the squatters evicted from Thapathali never moved into these buildings.

Officials at the Ministry of Land Management, Cooperatives and Poverty Alleviation, which was tasked with identifying genuine squatters, say that the main reason why the buildings remain unoccupied is because the squatters have refused to move there.

“They say they can’t afford to move there,” said Janak Raj Joshi, joint secretary at the ministry. “The squatters say the price is too high, it’s too far from the city centre where a majority of them work, and there is no public transportation or schools for their children.”

When the project was launched, Ichangu Narayan was a sleepy farming village, far different from the satellite town it has transformed into in recent years. Public transportation was limited and so were jobs available to a squatter.

The housing units in Ichangu Narayan are small, a little over 200 square feet in size. Each unit was priced at Rs1.2 million, to be sold to squatters at low-interest loans, according to officials at the Kathmandu Valley Development Authority. The other alternative was to charge them rent.

“We can’t let them stay for free,” said Tiwari. “Who is going to pay the utility bills?”

But representatives of squatter communities say they refused to accept the government’s proposal because they were left out from any decision-making processes.

“We were only called for consultation after they had built the buildings,” said Krishna Paudel, a member of the Society for the Preservation of Shelters and Habitations in Nepal, a network of landless people in the country. “We refused to move there because it felt like the government was just trying to get rid of us, moving us far away to live in cramped spaces like cattle. Just because we’re landless doesn’t mean the government can treat us inhumanely.” 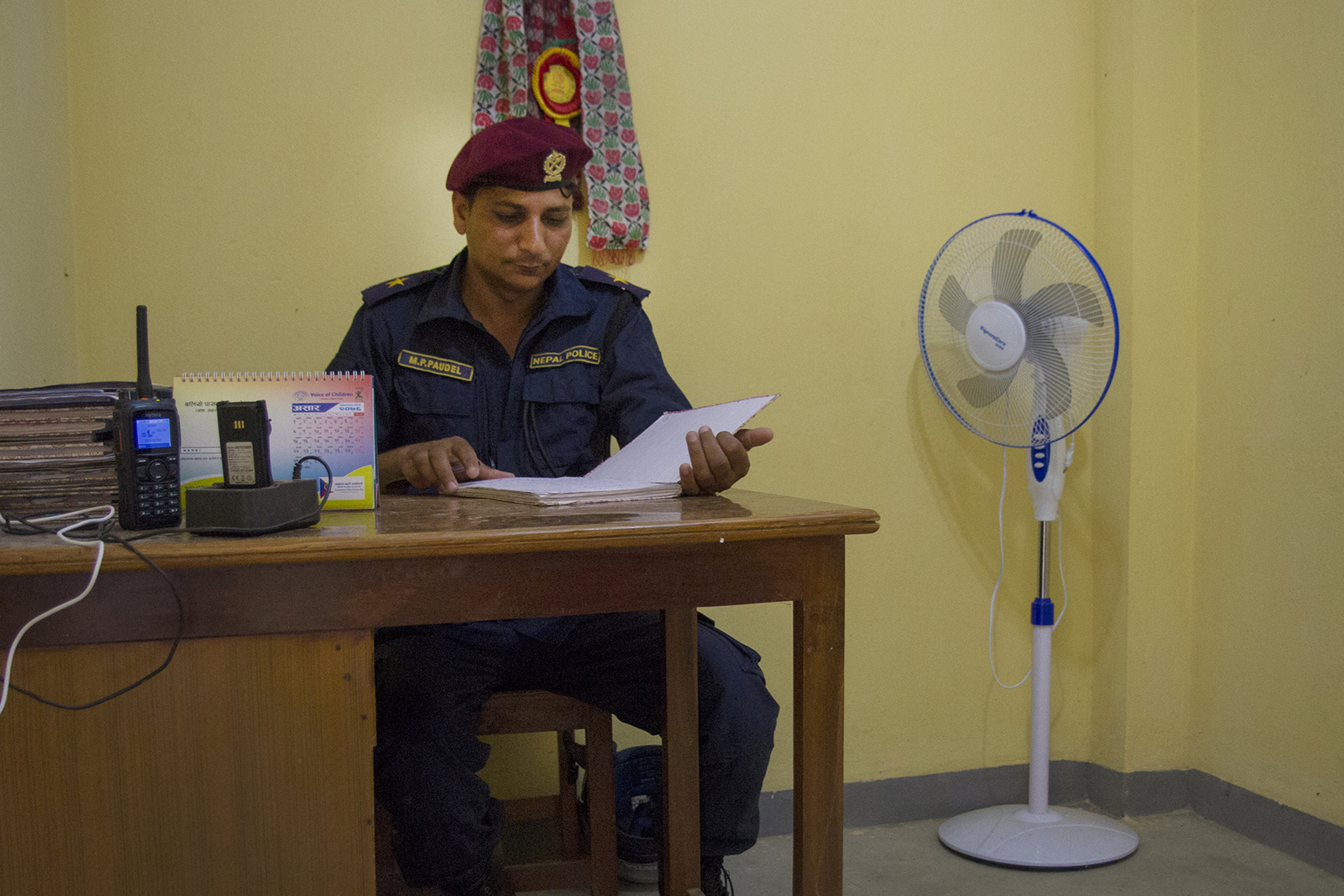 A ward office and temporary police unit on the ground floor are the only occupants in the housing complex in Ichangu Narayan.  Tsering D Gurung/TKP

Unlike the Ichangu Narayan housing project, the Kirtipur Housing project, an initiative led by Lumanti, a non-government organisation, actively involved the families who would go on to live there.

The housing project, which was completed in 2005, was built for families whose houses were demolished to clear space for the Bishnumati Link Road project. Forty-four families were resettled there.

Each family was allotted a two-storied house, priced at Rs350,000, which was to be paid over a period of 15 years. Once the loan was repaid, the ownership of the houses would be transferred to the recipient families.

According to officials at Lumanti, the families had a say in each decision: from the housing design and the location to the loan repayment scheme.

The project has been hailed a success by many researchers.

“This rehabilitation and resettlement project, based on a partnership between the urban poor and local government, was the first of its kind in Kathmandu and probably in the whole of Nepal,” French anthropologist Gérard Toffin wrote. “It proved to be a complete success and can be taken as an example for the future.”

Toffin, who interviewed families a few years after they had been resettled, said they expressed satisfaction at having been resettled in good conditions.

But the government failed to consider many things when it comes to the Ichangu Narayan housing project, Lumanti officials said.

“First, it did not seek any participation from the target community,” said Lumanti Joshi, programme manager for housing at Lumanti. “And it failed to realise that successful resettlement of a community doesn’t only mean providing them with a space to live in.”

A majority of slum dwellers are daily wage earners and live in close proximity to their workplace, said Joshi. “So to ask them to move far away from the city without providing them access to job and education would disrupt their livelihood,” she said.

Min Bahadur Subedi, who has been living in an informal settlement in Sinamangal for the past three decades, said he visited the housing complex with a few friends from the neighborhood.

“It was so far and the rooms were so tiny. How is an entire family supposed to fit in there?” said Subedi. An average squatter home is twice the size of the housing units.

“We want to own the land that we are living on,” said Ashok Rai, district president of the Society for the Preservation of Shelters and Habitations in Nepal. “Giving us a place in a housing complex is not going to solve the issue of landlessness.”

There also seems to be opposition from the local residents against the government plan to move the squatters into their neighbourhood.

“This is a VIP area,” said Ram Bahadur Lama, one of the residents. “Several lawmakers and high-ranking bureaucrats live in the area. They came here because of the peaceful ambience. Although I shouldn’t say this, we can’t have low-level people coming into the neighbourhood and disrupting the environment.”

While locals agree that the vacant buildings need to be utilised, none of their suggestions involved actually moving the squatters into them.

“The government can lease out the vacant space to colleges, organisations or NGOs,” suggested Om Dahal, another resident. “At least it will be earning some revenue.”