Calls are growing louder in Nepal to remove the stressful RT-PCR testing for travellers as more countries begin to ease restrictions.

The World Tourism Organisation of the United Nations predicts that international tourist arrivals could grow between 30 and 78 percent in 2022 compared to 2021. Post File Photo
bookmark

Khum Bahadur Subedi, president of the Trekking Agencies Association of Nepal, is breathing a big sigh of relief as the Omicron caseload is down.

Nepal’s trekking industry, a key sector that generates tens of thousands of jobs, disintegrated as the country remained under the pandemic's grip for two consecutive years.

Industry insiders say hundreds of trekking guides were forced to switch to other professions as the tourists did not return. But with Omicron cases ebbing, hopes of a revival are rising.

Nepal on Thursday reported 570 coronavirus cases in the last 24 hours, taking the nationwide infection tally to 974,857, after crossing 12,000 daily cases on January 20.

As of Thursday, the fully vaccinated rate had reached 57 percent of the 29.19 million population, according to the Health Ministry.

“We are soon entering the spring of 2022 now. That’s one of our busiest seasons. There are hopes that the industry will receive modest arrivals because inquiries are starting to come,” said Subedi.

As Omicron infections taper off, after an initial spike, a number of countries are recalibrating their travel rules. But industry insiders fear that Nepal, mired in a political controversy, can do little or nothing to draw tourists, a major foreign currency source.

The country's economy is suffering due to low output after tourism collapsed. Its foreign exchange reserves too are depleting at a fast pace. 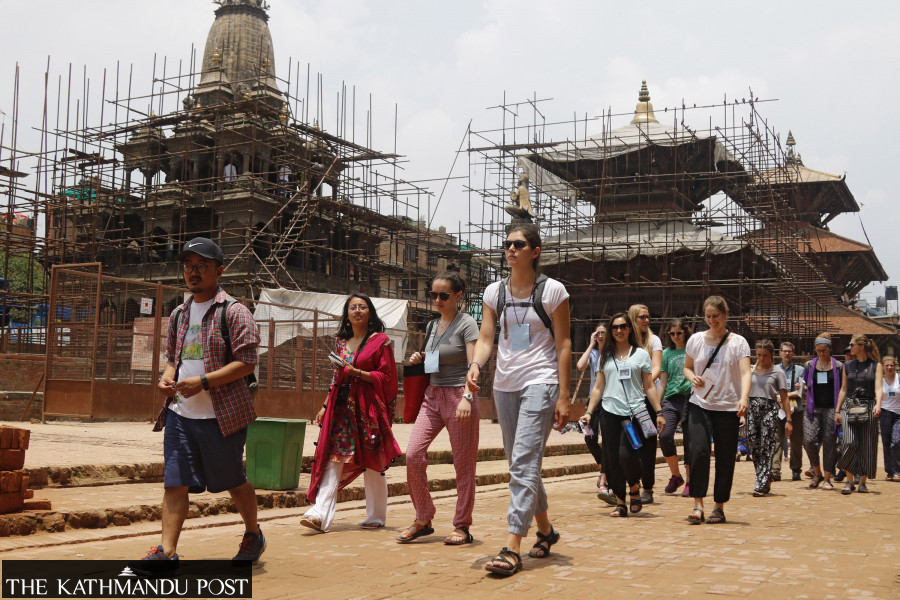 The country's economy is suffering and its foreign exchange reserves too are depleting at a fast pace due to low output after tourism collapsed.  Post File Photo

“Someone has to understand the gravity of the situation,” Birendra Basnet, managing director of Buddha Air, told the Post. “Tourists will travel if they find it easy to visit. If we act late, we could be a loser,” added the chief of the country’s leading private airline.

Basnet said that with almost all countries removing mandatory RT-PCR testing for travellers, there is no logic in Nepal sticking to it.

In the United States, the International Air Transport Association (IATA), in partnership with international aviation and travel and tourism stakeholder groups, urged the American government to remove the pre-departure testing requirement for fully vaccinated air travellers flying into the country.

The European Union has recommended that its member states remove Covid-19 travel restrictions for travel within the bloc.

The United Kingdom has announced the removal of Covid-19 pre-departure testing for vaccinated air travellers to enter the country.

From February 11, arrivals at UK airports will require only a passenger locator form. With the removal of testing, the average family can save around 100 pounds on their travel plans to Britain, said the UK government.

The expensive PCR tests in the UK had attracted the ire of frequent travellers as well as major aviation bodies, which argued that the testing regime was further dampening air travel demand.

Bahrain, Sweden, Greece and Portugal and most Scandinavian countries announced doing away with pre-departure Covid-19 tests for vaccinated travellers.

Last week, India said that passengers from "more than 80 countries" would be allowed to travel to the country with just a negative RT-PCR test report or a certificate of completing the primary vaccination schedule.

Thailand also announced easing entry requirements for vaccinated visitors from all countries from February as concerns about the Omicron variant of the coronavirus decline.

“Obviously, if Nepal removes the RT-PCR test report requirement and looks for a certificate of completing the primary vaccination, it could be the way forward to a faster tourism recovery,” Subedi told the Post.

Calls are growing louder in Nepal to remove the stressful RT-PCR testing for travellers. The Airline Operators Association of Nepal issued a press statement on Thursday requesting the government to remove the RT-PCR testing requirement and the need to fill out the travellers form of the Covid-19 Crisis Management Centre.

In Nepal, the spill over of tourism income is huge, according to Basnet. It benefits hotels, restaurants, airlines, trekking, mountaineering, handicraft and small and micro enterprises, he said.

“With Omicron receding, we are expecting Indian travellers in large numbers this spring season. If we ease restrictions, the industry may recover to pre-Covid levels soon,” said Basnet. “IATA says that the experience of Omicron has made it clear that travel restrictions have little to no impact in terms of preventing its spread.”

The country’s tourism season will begin next month with foreigners planning to trek in the Himalaya. The major attraction in the spring is climbing Everest.

Hotels, the biggest loser in the last two years, also have big expectations.

“In terms of business, 2022 is not going to be as good as 2019. But we are hopeful,” Ashish Chaloo, general manager of The Everest Hotel, told the Post. “If everything goes as planned and with no new Covid variant, we are expecting a full recovery of occupancy by the end of 2022 or early 2023.”

Nepal’s tourism industry sank to its lowest in four and a half decades and revenues hit rock bottom, making a big dent in the country’s economy.

In 2021, tourist arrivals reached the lowest level since 1977, as the coronavirus kept the industry paralysed despite several efforts to bring it back to life by relaxing entry restrictions.

According to the Nepal Tourism Board, the number of foreign visitors entering the country last year totalled 150,962, a long way from the 1.19 million arrivals in pre-Covid 2019.

The 2021 figure released on Sunday represents an 87 percent plunge from 2019 before the pandemic began its rampage.

Nepal ordered a second lockdown on April 29 as a public health measure to prevent the spread of Covid-19. The stay-home order was lifted after four months on September 1.

In 2020, Nepal had just launched an ambitious Visit Nepal Year campaign with much fanfare, aiming to attract at least 2 million tourists, only to have to abandon the programme in short order after the incipient pandemic exploded into worldwide proportions.

The disastrous year ended with 230,085 arrivals. Nepal had launched an ambitious Visit Nepal Year campaign in 2020 aiming to attract at least 2 million tourists, only to have to abandon the programme in short order after the incipient pandemic exploded.  Shutterstock

The biggest market for Nepal is India. “Right now, we are 25 percent booked,” said Chaloo. "With the resumption of flights from India, air fares will come down. This will encourage Indian travellers to come to Nepal because of proximity and obviously the cost factor.”

The World Tourism Organisation of the United Nations predicts that international tourist arrivals could grow between 30 and 78 percent in 2022 compared to 2021. While that sounds like a significant improvement, it would still be more than 50 percent below pre-pandemic levels.

“In Nepal's case, it will be a huge achievement even if the industry recovers by 50 percent in 2022,” said Subedi. “So far, inquiries have been growing but bookings have not shown much improvement.”

The full opening of the India sector may put the Kathmandu-Delhi route back in service. “It was the largest source market for Nepal,” said Basnet.

After almost two years of being cooped up in the home because of the pandemic, tourists are ready to hit the road with a vengeance, say observers. “There’s a lot of demand for travel, mostly in the Indian market. There’s a lot of people more comfortable with travelling now,” said Basnet.

“Let the government remove all the hassles. Let it begin by removing the mandatory RT-PCR testing for vaccinated travellers and then filling up the tiresome travellers form of the CCMC.”