In the local elections held earlier this year, Nepali Congress emerged as the largest party in the province.

As the country is set to vote in federal and provincial elections next week, many are watching the Madhesh province with keen interest because of its recent history of political movements that shook the entire nation.

Following the Madhesh uprising in the run-up to the promulgation of the Constitution of Nepal 2015, the Madhesh-based parties came into national spotlight. They fared well in the 2017 elections riding a pro-Madhesh wave.

The Madhesi parties, at the time of constitution promulgation, had sensed the new document would also fail to address several of their concerns including the demand for a separate Madhesh state covering the entire Tarai belt from east to west Nepal.

But beset by disputes and splits, Madhesh-based parties are now on the decline and traditional parties hold sway over the region.

In this year’s local elections, Congress emerged as the largest party in the province. On the other hand, the country’s largest party, the UML, also managed to make inroads in the region. Out of the 136 local units, Nepali Congress locked in 46, UML won 30, Janata Samajbadi 25, Loktantrik Samajbadi 14, while the Maoist Centre bagged victory in nine.

In the 2017 federal polls, the UML had a rather lacklustre performance in the province, winning only two of the 32 constituencies. Beset by disputes and splits, Madhesh-based parties are now on the decline and traditional parties hold sway over the region.  Prakash Chandra Timilsena/TKP

But in the next week’s elections, two strong alliances are going head to head. One is led by the Nepali Congress with the Maoist Centre, the Unified Socialist, the Loktantrik Samajbadi Party and the Rastriya Janamorcha as partners, and the other is the UML-led alliance with the Janata Samajbadi Party and the Rastriya Prajatantra Party as partners (in select constituencies of the province).

Some constituencies in Madhesh are therefore going to see tough competition.

Janata Samajbadi Party chair Upendra Yadav and Janamat Party chief CK Raut are in the fray in Saptari-2. Yadav is supported by the UML while Jay Prakash Thakur, another strong candidate, is backed by the ruling coalition.

As per local observers, caste-based politics plays a considerable role in elections here.

As Khalid Siddiqui from the Janata Samajbadi Party was elected to the National Assembly with Yadav’s support, the latter is expected to win a good chunk of local Muslim votes.

Thakur, another candidate, is also considered strong as he had garnered more than 9,500 votes from the constituency as an independent candidate in the 2017 elections.

CK Raut, however, is a new face in the constituency. He is popular among the poor and may also attract a good chunk of frustrated votes on the back of his anti-corruption campaigns.

Shrestha had defeated Ram Chandra Paudel in the 2017 polls in Tanahun-1, while Miya was elected from Bara-4 as a candidate of the then Rastriya Janata Party. This time, Miya defected to the CPN-UML after his party, the LSP, denied him a ticket.

Shrestha, who has the backing of the LSP in the constituency, is regarded as a candidate with a good chance of winning. Miya, on the other hand, is expected to attract a good chunk of Muslim votes.

A fierce competition is anticipated in the constituency. 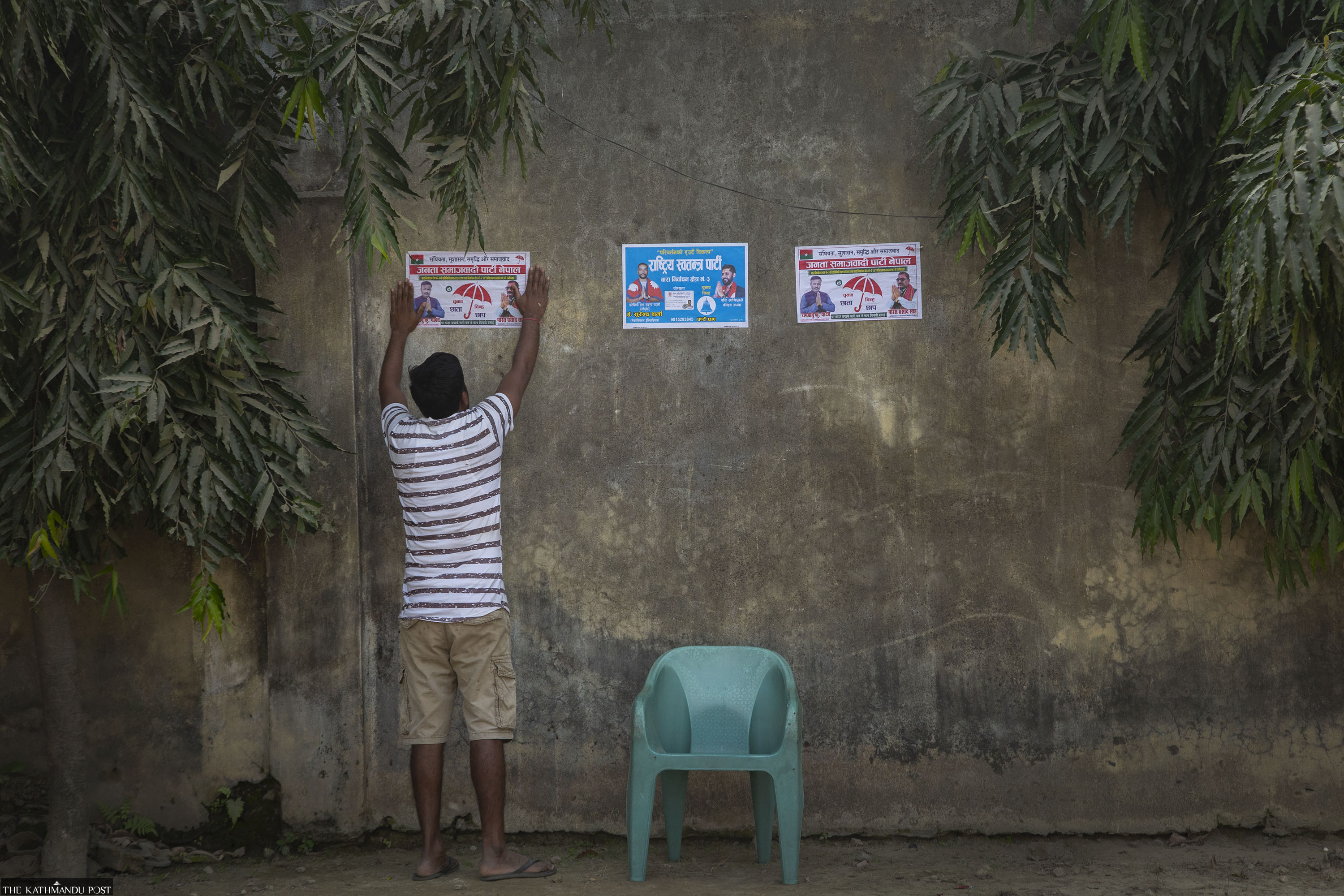 Some constituencies in Madhesh are going to see tough competition.  Prakash Chandra Timilsena/TKP

Another battleground constituency is Parsa-1, where LSP leader Laxman Lal Karna is contesting as a ruling alliance candidate, Janata Samajbadi Party leader Pradip Yadav is in the fray with UML’s backing, and Ajaya Dwivedi is contesting as an independent. Dwivedi, a well-known former Nepali Congress leader and ex- president of the party’s district chapter, is also considered a strong candidate.

Karna has shifted to Parsa-1 from his old constituency of Parsa-4. LSP does not have a stronghold in Parsa-1, but he might benefit with the support of the Nepali Congress, which has a good vote base here.

Based on the results of the recent local elections, Pradip Yadav has the highest number of votes among the candidates of the ruling alliance.

LSP leader Anil Kumar Jha is contesting from Dhanusa-3 under the ruling alliance while UML leader Juli Kumari Mahato is in the fray with support from the JSP. In the 2013 elections, Mahato had lost to Congress leader Bimalendra Nidhi. In 2017, she did not contest from the constituency.

Anil Jha contested the 2017 polls from Rautahat 1 and won. As per the seat-sharing arrangement of the ruling coalition, Unified Socialist chair Madhav Kumar Nepal is contesting from Rautahat 1.

The votes garnered by parties in the latest local elections suggest that Nepali Congress is the strongest in Dhanusha-3 followed by the CPN-UML. But Jha has the challenge of transferring votes from the Nepali Congress in his favour as the LSP is only the fourth largest party in the constituency.

And in Siraha-2, Chitra Lekha Yadav of the Nepali Congress and Raj Kishore Yadav from the Janata Samajbadi Party Nepal are contesting the upcoming polls as candidates of the two alliances.

Both of these leaders have become ministers by contesting polls from different constituencies in Siraha district. The results of recent local elections suggest a difference of under 2,000 votes between the Congress-led alliance and the UML-JSP alliance in the constituency, heralding a tough competition.

Raj Kishore Yadav had won the last federal polls from Siraha 4. Chitra Lekha Yadav was elected to the parliament under the proportional representation system in 2017.