The returnees have to follow certain procedures and remain in quarantine after entering Nepal.

Hundreds of Nepalis without any food and water and wishing to return home were stopped by security forces at entry points. File photo.
bookmark

Nepalis living in India and willing to return home can use 20 border points to enter the country, the Embassy of Nepal in India said on Wednesday.

Issuing a statement, the embassy though has urged all to stay wherever they are given the risk of the spread of the coronavirus, it has urged all those willing to return due to various reasons to use the 20 designated border points to enter the country and follow the government-issued advisory.

“Nepalis now can enter the country through Pashupatinagar in Ilam, Kakadbhitta in Jhapa, Rani in Morang, Kunauli in Saptari, Thadi and Maadar in Siraha, Bhittamode in Mahottari, Malangawa in Sarlahi and Gaur in Rautahat,” said the embassy. “Similarly the other border entry points that Nepalis can use to enter the country are: Birgunj in Parsa, Maheshpur in Nawalparasi (West), Belahiya in Rupandehi, Taulihawa and Krishnanagar in Kapilvastu, Jamunaha in Banke, Surajpur and Gulariya in Bardiya, Gauriphanta in Kailali, Gaddachauki in Kanchanpur, Jhulaghat in Baitadi and Darchula in Darchula.” 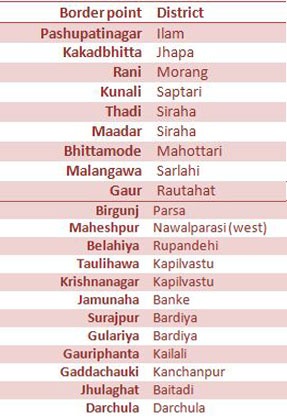 All those returning home will have to follow certain procedures at the nearest “holding point” and stay in quarantine for a certain period, according to the embassy.

Hundreds of Nepalis without any food and water and wishing to return home were stopped by security forces at entry points after the government failed to make a decision. Authorities in some districts brought them home on condition that they undergo coronavirus tests and stay in quarantine if need be.

But as the provincial government sought to test them all before allowing them entry, thousands were stranded at the border waiting for their turn to be tested. With the provinces grappling with resources management, many of them have been forced to spend their days hungry and their nights on the ground.

The National Human Rights Commission had drawn the government’s attention to the plight of those stranded at Nepal-India border points and asked to rescue them immediately. The national rights body had stated barring entry into the country was violation of their constitutionally guaranteed rights.

Bajura stares at food shortages ahead of major festivals

New rule may prevent conflicts of interest in user groups

Why does power keep fluctuating? It’s because of ageing infrastructure

A day after responding to Nepal’s concerns, MCC officials arrive in Kathmandu