A make-or-break situation that the ruling coalition is in

Alliance partners expedite meetings, and the CPN-UML has emerged as a key player as Millennium Challenge Corporation Nepal Compact becomes a crucial issue.

The ruling coalition is in a make-or-break situation. Leaders have expedited meetings and negotiations.

While the Millennium Challenge Corporation compact, a $500 million US grant, lies at the heart of the current crisis in the five-party coalition, the main opposition CPN-UML has emerged as a key player.

As Prime Minister Deuba has come under immense pressure from the US to pass the MCC compact, he is concerned about a possible breakdown of the coalition. While the Maoist Centre wants an electoral alliance with the Congress, a section led by Koirala has warned party leadership against such plans.

Sources said Dahal communicated to Koirala that the latter should help to keep the coalition intact and delay MCC ratification for now.

Members from Dahal’s Secretariat said that the Maoist chair wanted to delay the MCC compact ratification.

Nepali Congress leader Amaresh Singh also said Dahal was of the view that the US grant agreement should not be passed before the local polls.

"We are still discussing MCC. However, it cannot be passed before the elections. I have requested the prime minister to take his time to resolve the outstanding issues," Nepali Congress leader Amaresh Singh said, quoting Dahal.

Later in the day, Deuba held a meeting with Dahal and CPN (Unified Socialist) chair Madhav Nepal, another coalition partner and an opponent of the MCC compact.

A member from the Prime Minister’s Secretariat said Deuba has been trying his best to build broader consensus among all parties including Maoist Centre and CPN (Unified Socialist) but if that fails, he will take the support of the main opposition UML to ratify the MCC compact.

“This morning also Deuba held discussions with Dahal and Nepal for consensus on MCC ratification so that no one gets blamed,” the member said.

He said the prime minister is also in touch with the UML chair.

With the Nepali Congress already taking up the MCC compact for discussions, the coalition’s future now is hanging in the balance.

“The MCC issue is one of the top agenda items of our party’s work execution committee,” said Prakash Sharan Mahat, newly appointed spokesperson for the Congress. “Leaders are of the view that the US compact should be tabled in Parliament and lawmakers should be allowed to decide its fate.”

The Maoist Centre and the CPN (Unified Socialist), however, are against even the tabling of the MCC compact, let alone its ratification.

CPN (Unified Socialist) chair Madhav Kumar Nepal said that discussions were held on the US compact during his meeting with Deuba and Dahal.

“The prime minister has been making utmost efforts for the MCC compact’s ratification. He has given me a document containing clarifications to study,” said Nepal refusing to offer any further details.

According to Nepal, there, however, is an understanding among the leaders to continue the coalition during the local level elections scheduled for May 13.

Asked if his party has announced protests against the MCC compact from Sunday, Nepal said the party's sister organisations have. 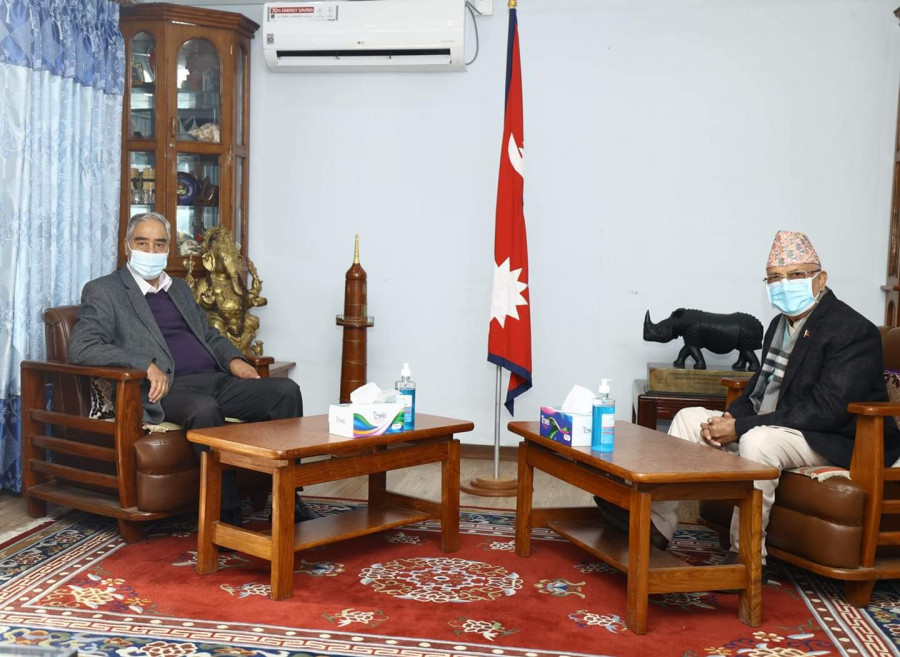 Meanwhile, Deuba has been using some of his aides as the backchannel to communicate with Oli for MCC compact’s ratification.

“I don’t know whether our chairman has met the prime minister after their meeting at Balkot on January 8,” said Mahesh Basnet, UML politburo member who is a close aide to Oli. “The two leaders, however, are in touch. “It seems the prime minister is still trying to convince Dahal and Nepal.”

According to Basnet, though Dahal and Nepal have been saying the compact cannot be ratified before the local polls, their actual stance is not clear yet.

“Yes, Congress seems determined to ratify the MCC compact,” Basnet told the Post. “But we will make our position clear only after the ruling coalition makes its position clear.”

With more than 90 votes in Parliament, the UML is key for Deuba, whose Nepali Congress has just 61 votes.

The current strength of the Parliament is 271. For the compact to be ratified, it needs a simple majority of the lawmakers present during the voting.

The Maoist Centre and the CPN (Unified Socialist) have 48 and 23 seats, respectively, in the House.

UML leaders say Deuba is in a precarious position, as he wants to see the MCC compact ratified while he also wants to continue the coalition. According to them, the UML won’t support Deuba’s ratification bid until the coalition remains intact.

A senior UML leader said the prime minister is confused and how coalition partners are adding to the confusion.

One of Deuba’s concerns, according to the UML leader, is that the UML could make an alliance with the Maoist Centre and the CPN (Unified Socialist) if his coalition breaks apart.

“But how can the parties which have just split join hands for the polls? They cannot forge an alliance at least for the upcoming local polls,” said the leader referring to the Maoist Centre and the CPN (Unified Socialist). “On top of that, our leaders are not even in talking terms with Madhav Nepal.”

As Deuba continues to goad the UML into supporting him for MCC compact’s ratification, the opposition appears to be waiting for an opportune time to respond, at least until when the party has its own interests served.

“Let’s see how the situation evolves… a clear picture will emerge in a few days,” said Subas Nembang, deputy leader of the UML Parliamentary Party. “There could be some development before the Parliament meeting.”