All mandatory screening instructions for airlines flying to China have come from Chinese authorities while the Kathmandu airport has only circulated a manual.

Kathmandu’s Tribhuvan International Airport has activated an ‘airport emergency plan’ as part of its preparations to respond to the coronavirus outbreak, even as airlines cancel flights and adopt increasingly stringent screening measures.

Airports and airlines in many countries are taking drastic steps to protect staff and passengers amid heightened concerns over the outbreak of a new virus originating from the Chinese city of Wuhan. Many airports have instituted mandatory health screenings of passengers from China while Chinese airlines are checking the temperature of every passenger before flying in and out.

Thousands of Chinese tourists visit Nepal every year but so do Chinese businesspeople and Nepalis who work and study in China. Despite this large influx of passengers from China, Tribhuvan International Airport has been slow to react.

Thermal scanners will scan the temperature of passengers arriving at the airport and if the temperatures are abnormal—above 98.6 degrees Fahrenheit or 37 degrees Celsius—the passenger will be isolated and sent to the government-authorised hospital via ambulance, said Karna.

Gopal Pandey, in-charge of the airport health desk, told the Post that the airport authorities have started to install an air conditioner in the health desk area.

“In cold temperatures, like it is in Kathmandu, the screening machine should work,” said Pandey. “If any passenger suffers from high fever, the pilot has to communicate the issue with air traffic controllers in the destination airport.”

If a passenger takes medicine before boarding or disembarking, the thermal scanners will not show a high temperature, say doctors, who also point out that the virus is transmissible in its incubation period of 14 days, and during this time, patients do not show any outward symptoms.

According to Karna, there will also be an announcement on every arrival flight, asking passengers if they are suffering from a fever or a cough and if so, to report to the health desk. Passengers will also have to present themselves to the health desk if they have travelled to Wuhan in the past two weeks, Karna said. 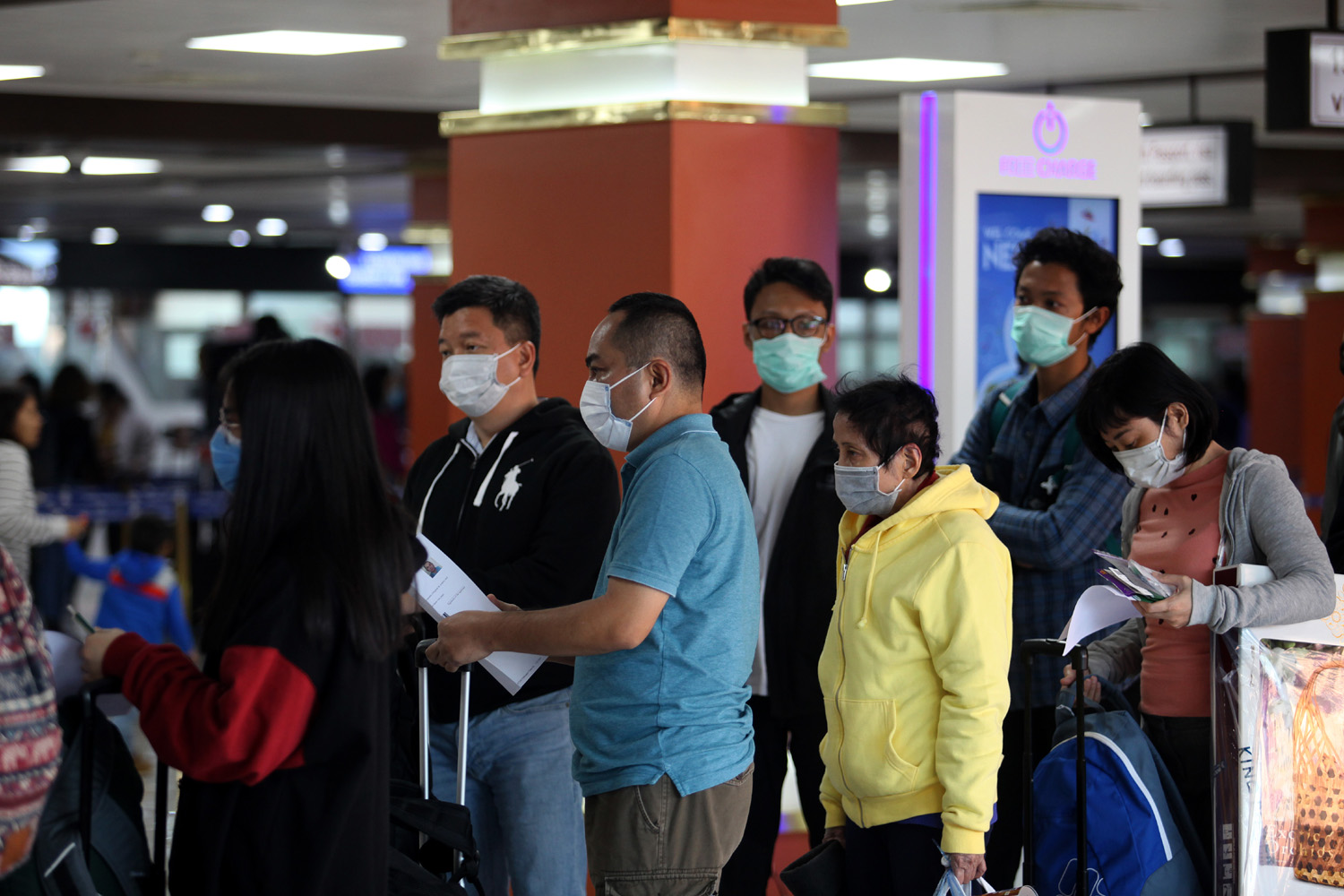 Passengers wearing masks walk out of the Tribhuvan International Airport in Kathmandu on Tuesday.  Kiran Panday/TKP

So far, all reporting will be voluntary and if passengers decide not to report themselves, there is little that the airport can do.

All airlines flying to and from China have instituted mandatory screenings for all passengers on the Chinese authorities’ instructions, said Karna.

Dhiraj Chandra Shrestha, deputy sales manager of China Southern which flies between Kathmandu and Guangzhou, said that all passengers are quarantined in Guangzhou before they are issued boarding passes.

“There is a sensor at the quarantine gate, which will not open if the passenger has a temperature that is above the permissible limit,” he said. “But in Kathmandu, we are screening each passenger with an infrared thermometer—a temperature gun that measures the temperature when pointed to the forehead.”

Boarding passes are only issued once the traveller is confirmed to not have a high temperature, said Shrestha.

China Southern has not cancelled any flights as of Tuesday but said that passengers were dropping fast.

“We are refunding passengers without any charges if they wish to cancel their trip,” said Shrestha. Transit passengers are also cancelling their flights due to fears of contracting the virus at Chinese airports, he said.

The Lhasa-based Tibet Airlines was the first airline to announce a temporary suspension of its flights from Xi'an, the capital of Shaanxi Province in central China, to Kathmandu on Tuesday due to the rapid spread of the coronavirus. The airline has issued a notice to all travel agencies that from February 2 onwards, it will stop flights to-and-from Kathmandu.

Vijay Shrestha, vice-president of administration at Himalaya Airlines, told the Post that flights to Changsha, Guiyang and Shenzhen will be temporarily suspended from February 1 while Beijing and Chongqing flights would be continued.

“We decided to continue flights to Beijing as Nepali students’ movement may rise,” he said.

Other Chinese airlines are likely to follow suit as travellers’ movement—inbound and outbound—has started to drop rapidly, airlines officials said on Tuesday.

So far, all of the instructions for screenings have come from the Chinese government, say airline officials. Beyond providing them with a manual outlining of its emergency plans, Tribhuvan International Airport has not communicated any specific measures that the airlines need to adopt, said Vijay Shrestha.

The novel coronavirus has so far killed 82 people in China and infected thousands across the world, including Taiwan, Singapore, South Korea and the United States. On Monday, Germany announced its first case of the virus. Experts warn that the outbreak could last several months, but also say that the virus could die out as the seasons change.