Police employed force to disperse around 150 people gathered in peaceful protest outside the prime minister’s residence in Baluwatar. A peaceful programme in the Capital protesting the government's lacklustre response to the Covid-19 pandemic was met with water cannons and police batons.

Around 150 people had gathered in front of the prime minister's residence in Baluwatar at 10am on Tuesday, demanding that the government improve quarantine conditions and make wider use of the Polymerase Chain Reaction tests. They were also asking that the government come up with alternatives to the blanket lockdown imposed on the entire country since March 24.

The KP Sharma Oli government has long been criticised for its response to the Covid-19 pandemic. Despite an over two-month-long lockdown, coronavirus infections--and deaths-- continue to increase across the country. Thousands of people are in makeshift quarantine facilities that are themselves becoming hotspots for Covid-19 due to cramped conditions and a lack of basic sanitation facilities.

Calls to lift or ease the lockdown have increased too, with business owners defying orders to shutter their stores last Thursday. Many have also raised serious questions about the government’s failure to address the plight of the poor and the marginalised, who are suffering disproportionately from the lockdown after having lost jobs. There have already been a number of deaths that can attributed to the lockdown and its consequences.

The protest attempted to maintain physical distance with most attendees wearing masks and holding placards.

Though the protest was peaceful, police employed water cannons and batons to disperse the protesters. Some were taken into custody for breaking the lockdown.

“We had requested the police to give us 15 more minutes to sit in protest when the police charged," said Rohit Malla Shakya, 43, a businessman. "This is an indication that the government is getting more intolerant."

As images and videos of the protest and the police response began to circulate on social media, many called the police out for its disproportionate use of force.

“What a disgrace! This happened today during a peaceful socially distanced rally (at Baluwatar) urging the government to ramp up PCR tests and improve quarantine facilities,” said one user on Twitter. “Looks like the government cannot tolerate any form of protest that displays their incompetence.”

“Besides, Baluwatar is a sensitive area and protests started to block the road that many VVIPs need to travel through,” Gyawali told the Post.

Protest attendees, however, said that they weren't blocking the road and were about to wrap up the protest when police resorted to a baton charge and water cannons.

“We were not blocking the road, and it was very peaceful,” said 21-year-old actor Anna Sharma.

Eight people were taken into custody by the police. 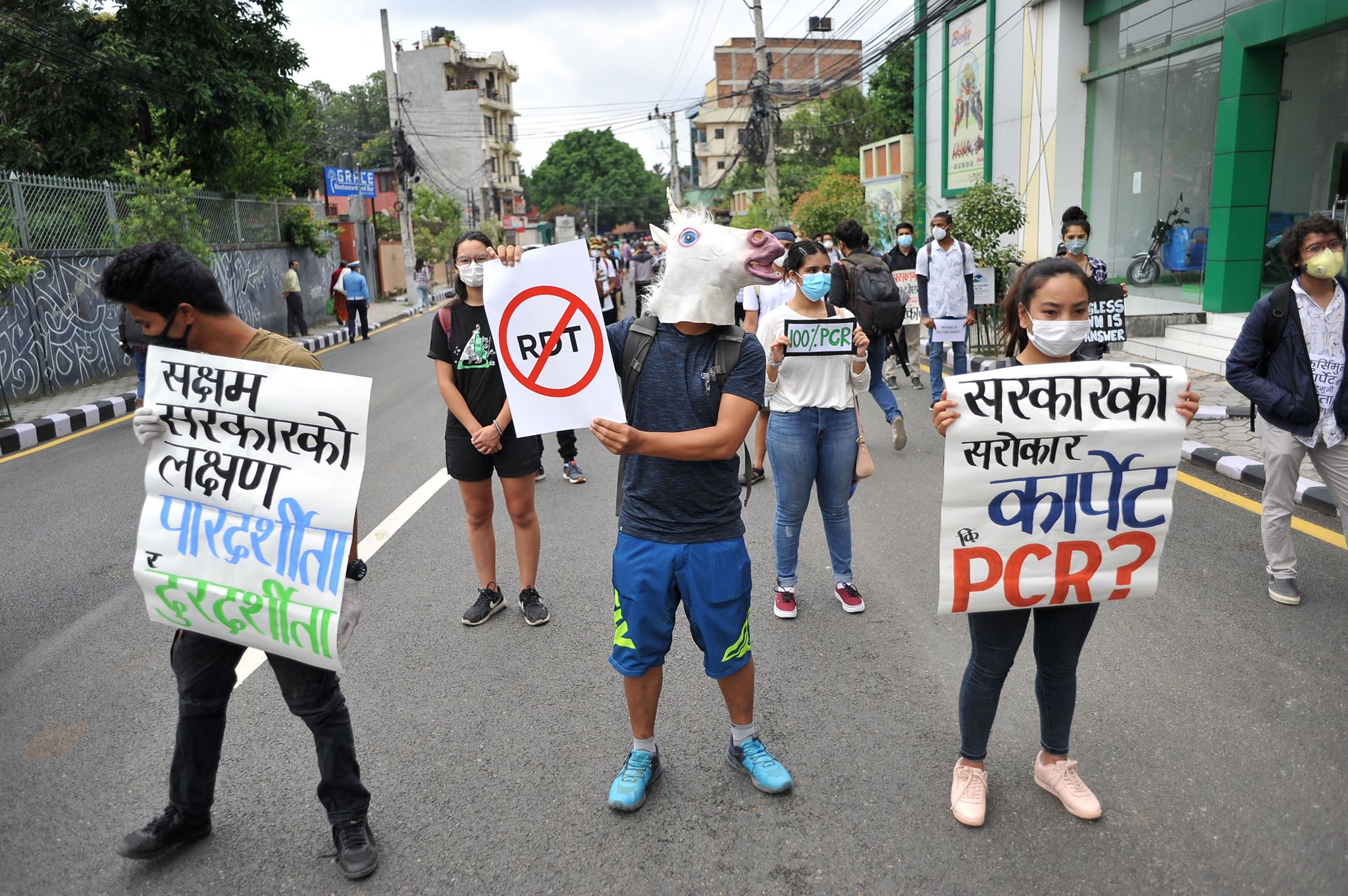