Khaptad National Park situated at the confluence of four districts—Bajhang, Bajura, Doti and Achham—is a mystical place of ethereal beauty and home to countless Hindu shrines.

Welcoming travellers throughout the year, Khaptad National Park wears a different look every season. While in the monsoons when most trekking routes in Nepal close, Khaptad welcomes all with blooming wildflowers; in winter the snow turns it into a picture-perfect winter wonderland while in spring the rhododendrons take over and colour the hills and valleys in a burst of crimson.

Since the far-flung Khaptad National Park is still off-beat for many travellers, the area remains pristine and untouched.

My friends and I travelled to Khaptad National Park during the peak monsoon season in July. A less than two-hour drive to Meltadi at Khaptad Chhanna Rural Municipality from Chainpur, the district headquarters of Bajhang, took us closer to the national park.

Another four-hour journey on foot from Meltadi takes you to the national park. 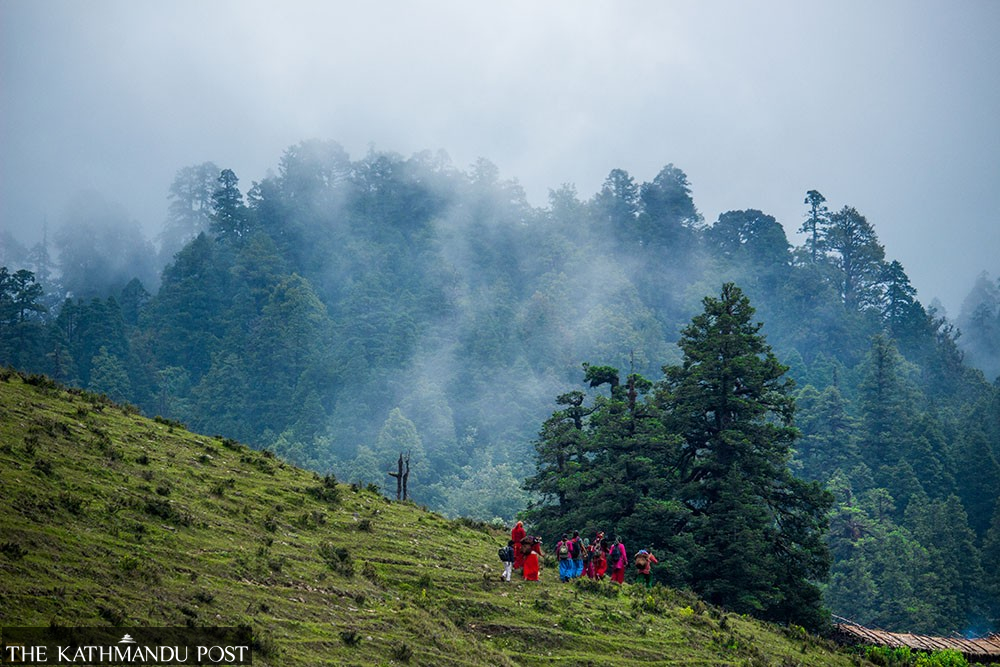 We were greeted by wildflowers of every imaginable colour. The narrow grassy roads that lead to the national park meander through paddy fields along the banks of Seti River and through quaint little settlements with stone-roofed houses.

If you are short on time or not up for a trek across the hills and valleys of the mountain districts, you can take a flight from Dhangadhi, the district headquarters of Kailali, to Bajhang, Bajura, Doti and Achham and opt for a shorter hike as we did.

The journey to Khaptad National Park takes you through dense forests and open fields always accompanied by the breath-taking sites of Saipal, Shankhamala and Raksiyo mountains. A twenty-minute walk from the guest house takes one to Khaptad Daha, a mysterious lake whose source and outlet are still unknown. A fascinating aspect of this lake is that it is divided into two clear parts—one holding limpid, white water and the other murky, brown water.

The water level of the lake remains constant throughout the year and the blooming wildflowers and rhododendron add to the beauty of the dual-coloured lake.

On the northern part of the lake lies the Jagannnath Temple completely built of wood. The locals estimate that the temple was built in the 13th Century.

A 30-minute walk to the east from the temple takes one to Sahasralinga which has religious and historical importance. Located at an altitude of about 12,000 feet from sea level, Shahasralinga is a shrine marked by a huge boulder with three cone-shaped peaks on top that signify Shiva, Parvati and Ganesh.

Hundreds of small rock formations shaped as the Shivalinga are beneath the Shahasralinga.

Every year, a fair is organised at Triveni on Ganga Dassehra, the 10th day of the lunar fortnight in Jestha, the second month of the Hindu calendar. Another main attraction in Khaptad is the hermitage of Khaptad Baba, situated at an elevation of 11,000 feet from sea level. Khaptad Baba, a hermit, is believed to have achieved enlightenment here. Legend holds that the Khaptad Baba was an allopathy doctor who, after failing to treat a patient, turned to Ayurveda, yoga and meditation. In Khaptad, he is supposed to have authored a number of books, including philosophical science and health science.

The materials used by Khaptad Baba, his writings and the books he read have been preserved.

It generally takes a week to cover the entire Khaptad National Park which spreads across an area of 225 square kilometres. The national park has 22 pastures, 53 lakes and 12 caves.

Despite its richness in natural beauty, biodiversity and religious and cultural significance, Khaptad lacks publicity and promotion to attract more visitors. Poor infrastructure too has been a barrier to developing the areas as a tourism hot spot. But for those who are willing to take the path less travelled, there is no other place that gives you an experience of a lifetime like Khaptad.