Ringaze claims it has gained more than four dozen organisations as its clients across the country in less than a year.

Ringaze was developed for non-governmental organisations looking for a medium to transmit awareness messages to a large population during the Covid-19 pandemic. SHUTTERSTOCK
bookmark

A Nepali start-up providing bulk audio broadcasting service has been making its voice heard, so to speak.

Launched in 2020, Ringaze claims it has gained more than four dozen organisations as its clients across the country in less than a year. The firm disseminates a pre-recorded message transmitted over voice calls.

The co-founders are Dipesh Regmi and Sushant Rai, the same people who established VoxCrow, a call centre company, in February 2018.

“We registered Ringaze Tech as a company 10 months ago,” said Regmi. The founders say they aim to bridge the information gap across Nepal.

The voice broadcasting service provided by the company can be used for phone surveys, poll ratings and feedback collection, according to its developers.

“It took us two years to develop Ringaze,” said Anil Dhakal, manager for brand and marketing at VoxCrow.

Ringaze was developed for non-governmental organisations looking for a medium to transmit awareness messages to a large population during the Covid-19 pandemic.

“The aim was to reach the unreachable,” said Prabesh Timilsena, business development officer at Ringaze. “We wanted to bridge the communication gap, especially among communities in rural areas which are hard to reach.”

The advantage audio mediums have over text messages is the strength of Ringaze, according to its developers. The technology can overcome the literacy barrier since the response rate for voice calls are higher compared to Short Message Service (SMS), they say.

"There is less chance that the receiver will ignore a voice call compared to a text message," said Dhakal.

“Since a simple phone set can receive pre-recorded messages, the application is wider. Ringaze can be used to reach areas with no or poor internet signal.”

Ringaze can be used for Public Service Announcements (PSA) during natural disasters or health-related emergencies, polls and surveys, and election campaigns.

Dhakal believes bulk voice calls can be instrumental in informing people about natural disasters. “Our service was used when the water level in the Narayani River rose to a dangerous level this monsoon,” he said. 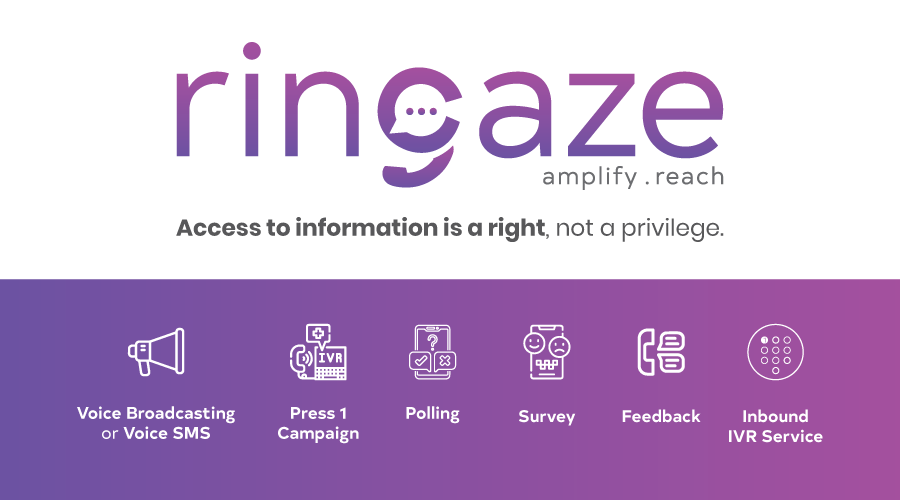 “Besides non-governmental organisations, microfinance institutions, and educational and health institutions have been using Ringaze. After signing an agreement with the client, we provide them access to our platform which they can use themselves or ask us to carry out the desired tasks,” said Timilsena.

“We have been working with Nepal Telecom and Smart Cell,” Dhakal said. “The additional taxes we need to pay to the telecom authority has made our product a little expensive.”

The standard market rate for using the Ringaze service is Rs2.50 for a 30-second audio. “However, the cost differs depending on changes in the duration of the calls and the volume,” said Timilsena.

Ringaze also provides its service in a distributor model. “At least 25 distributors from across Nepal have been using our platform for various purposes,” said Timilsena.

The firm has worked hard to make the platform familiar to the general population in the one and a half years since it launched.

“Raising awareness among the general public regarding our product and services has been a challenge since our product is new in Nepal. But we have been carrying out a robust promotion campaign,” Dhakal said.

"Products like Ringaze already exist in the international market. We are working to launch it in South Asia and parts of Africa in the near future. We have been doing well, and are close to breaking even."

Ringaze has been selected among the top five finalists in the Start-up category for this year’s ICT Awards.

The final event of the seventh edition of the awards, organised by Living with ICT, a tech-related magazine, will be held on December 23.