The man suspected of killing 11 people in a St Petersburg train is in his early 20s and from Central Asia, Russian media report.

The man suspected of killing 11 people in a St Petersburg train is in his early 20s and from Central Asia, Russian media report.

At least 45 people were injured in the explosion between two underground stations on Monday afternoon.

The Interfax and Tass news agencies said the suspect had been identified, but there are conflicting reports as to whether he was a suicide bomber.

Authorities in Saint Petersburg have declared three days of mourning.

President Vladimir Putin, who was in the city when the blast occurred, visited the scene on Monday evening and laid flowers at a makeshift shrine.

Russian investigators have described it as a suspected "act of terror" but they have given few details. No group has said it was responsible.

World leaders rallied behind Russia in condemning the blast. 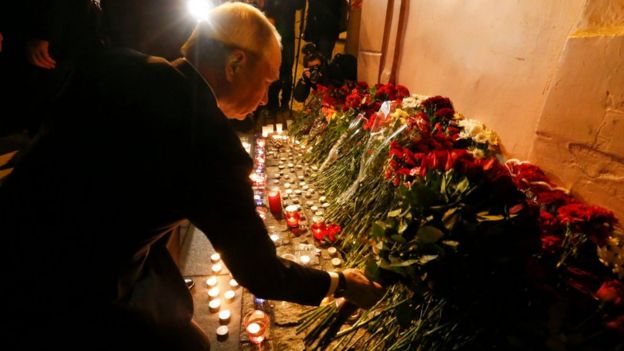 President Putin laid flowers near the scene of the blast

The White House said President Donald Trump had spoken to Mr Putin by phone and offered "full support" in bringing those responsible to justice.

"Both President Trump and President Putin agreed that terrorism must be decisively and quickly defeated," a statement said.

First images from the scene showed a train at Tekhnologichesky Institut station with a hole blown in its side and wounded passengers on the platform.

Initial reports suggested there had been two explosions, one each at Sennaya Ploshchad and Tekhnologichesky Institut stations.

But the Russian National Anti-Terrorist Committee later confirmed there had been only one explosion, between the two stations, at about 14:30 local time (11:30 GMT).

Senior investigator Svetlana Petrenko told Russian media the train driver's decision to continue to the next station almost certainly helped save lives, as it allowed people to be rescued quickly.

Health Minister Veronika Skvortsova said 10 people had died - seven at the scene, one in an ambulance and two in hospital. The death toll was later raised to 11. 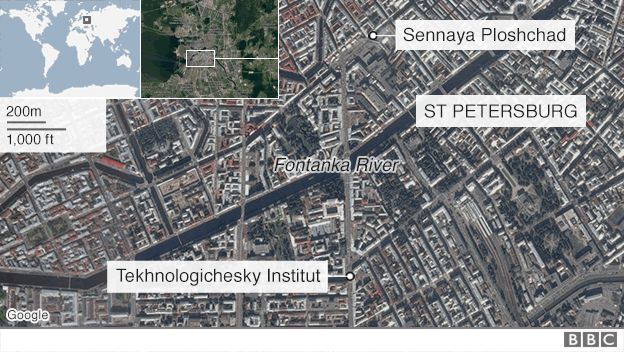 Andrei Przhezdomsky, the head of the National Anti-Terrorist Committee, said the explosion was caused by "an unidentified explosive device".

President Putin said all causes, especially terrorism, were being investigated.

The discovery of an explosive device at another station, Ploshchad Vosstaniya, also suggested a co-ordinated attack.

Interfax said the focus was now on a 23-year-old man from Central Asia known to have links to radical Islam.

The news agency said the man died in a suicide blast and was identified through his remains. But the president's spokesman Dmitry Peskov would not comment on reports a suicide bomber was to blame.

Another agency, Tass, reported that a woman may also have been involved in the explosion. 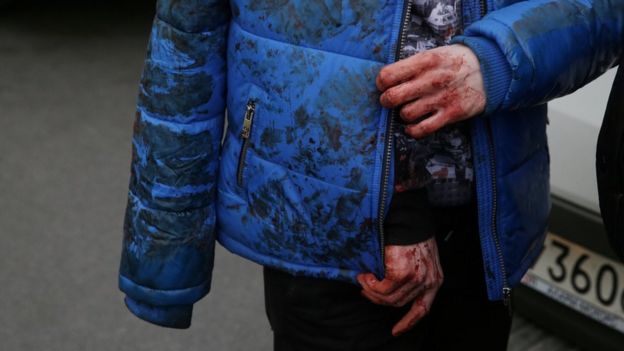 The entire metro network was shut down

The Russian authorities are sensibly being cautious before apportioning blame for Monday's metro blast. An earlier quote by the prosecutor-general that it was an act of terrorism was quickly retracted.

The FSB security service, the successors to the Soviet-era KGB, have skilled investigators, including forensic explosive experts. They will have been examining security camera footage and the explosive residue for clues, as well as the second device that was found intact and defused.

Their suspicions are likely to focus on two possible suspects, neither yet confirmed. First, an IS-inspired group enraged by recent Russian airstrikes in Syria. And second, Chechen nationalists (or even a combination of both).

Chechen militants and international jihadists do have a track record of plotting to attack Russia's transport hubs, notably in Moscow. An estimated 7,000 Russians have travelled to Syria to join extremist groups - and some have returned.

St Petersburg's metro system, which is used by more than two million passengers every day, has not suffered previous attacks.

Several transport hubs in Russia have, however, been attacked. In 2010, 38 people died in a double suicide bombing on the Moscow metro.

And a year later, a bomb exploded on a high-speed train travelling between Moscow and St Petersburg, killing 27 and injuring another 130.

Both attacks were claimed by Islamist groups.

Rapid testing for Omicron: Is a nose swab enough?