A Nepali-French team claims to have explored alternative route to the summit. Feasibility will be tested in spring. 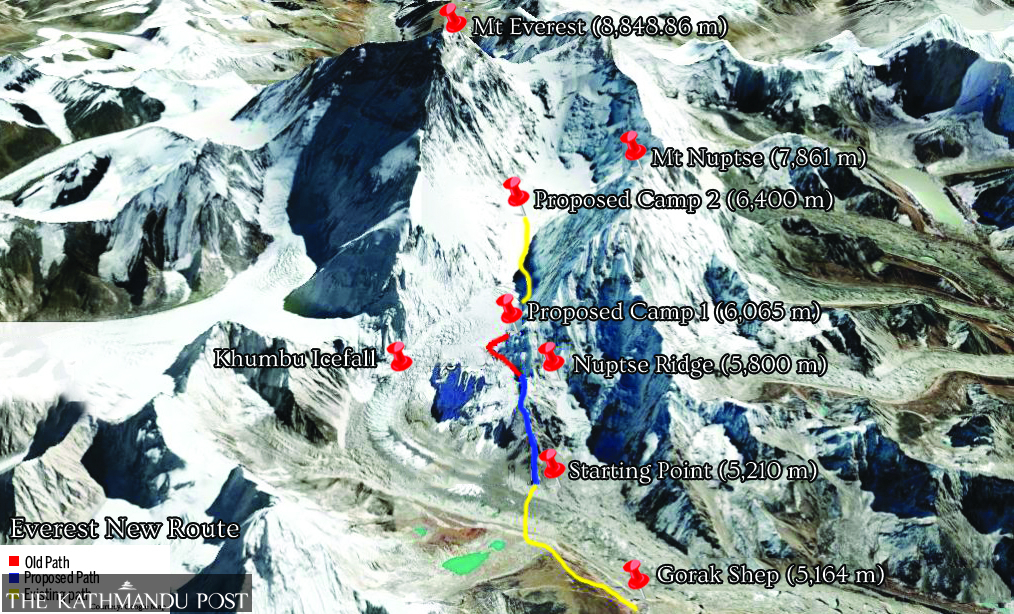 The passage through the Khumbu Icefall, the route that leads to the world’s tallest peak, is so notoriously dangerous that even experienced Sherpas hesitate to move when the sun shines.

The Khumbu Icefall, a river of ice—a kilometre or so, is normally crossed during the night or early morning with climbers putting headlamps on their helmets.

Normally, the route is crossed between 3am and 5am, the time when the ice blocks and the hanging glaciers are stable and avalanche risks are low.

During the day, as the sun warms the mountain, the hanging glaciers begin to melt and ice starts to crumble, causing avalanche risk.

On April 18, 2014, an avalanche resulting from a falling serac had buried 16 sherpa guides in the Khumbu Icefall that led to the cancellation of the season’s expeditions.

But there is good news. The Khumbu Icefall stretches from 5,500 to 5,800 metres and lies just above the Everest base camp, where hundreds of climbers set temporary tents annually during the spring climbing season. The first challenge for every climber is to tackle the deadly Icefall.

“The alternative route that we have tested in November to bypass the infamous Khumbu Icefall will be tested in the spring climbing season next year to assess whether it is commercially feasible,” famed French mountaineer Marc Batard told the Post.

“We believe it is a life-saving detour.”

In September 1988, it took Marc, the 70-year-old mountaineer born in Villeneuve-sur-Lot, only 22 hours and 29 minutes to reach the summit of Everest without using bottled oxygen, which earned him an entry in the Guinness Book of Records. The record stood unbroken for 10 years.

Now, Marc has returned to Everest after three decades. “My mission this time is to save the lives of climbers,” said Marc, who has three children and nine grandchildren. “I am confident the route will be commercially workable.”

Marc also plans to repeat his Everest success as he plans to climb Everest by following the route he has pioneered. “I am climbing the 8,848.86 metre Everest next spring without the support of bottled oxygen,” Marc said.

If he succeeds, Marc would not only become the oldest climber to reach the world’s tallest peak without using supplementary oxygen but will also be a pioneer of the new route. A climber climbing a rocky spur below the flank of Mt Nuptse. Photo courtesy: Marc Batard

Italian Abele Blanc currently holds the record of the oldest climber, who reached the summit in 2010 at the age of 55 years and 264 days without using bottled oxygen.

Marc claims that he and his team explored the new route this November. The plan, however, started in spring. Marc came to Nepal in spring and made an aerial survey of the proposed route.

The fieldwork started in November.

A seven-member team led by Marc and Pasang Nuru Sherpa, including Marc’s son, climbed the new route from November 15. The first phase trial lasted until November 21.

The team made Gorak Shep at 5,140 metres their base camp.

“We then hiked through the Mt Nuptse ridge, the neighbouring mountain,” said Marc. The Nuptse (7,861m), Everest, and Lhotse (8,516m) are the Khumbu triple crown facing one another.

“The new route follows a rocky spur below the flank of Mt Nuptse,” Marc added. “The rocky spur, a vertical cliff, is a bit difficult. But after it is climbed, the route from there becomes easy to navigate.”

Approximately, it takes seven hours to cover a distance of around 1,000 metres to reach a spot at 6,200 metres using the new route from Gorak Shep base, which adjoins Camp 1 at 6,065 metres just above the Icefall.

“This will completely bypass the treacherous Khumbu Icefall. There is no danger of an avalanche in the Nuptse ridge,” said Marc.

Camp 1 is a temporary camp where most climbers spend a night.

According to Marc, out of around 1,000 metre-long trails, they have discovered only 700 metres. The remaining 300 metres was already in use.

“But we need strong equipment and investment to make this route commercially viable,” said Marc.

The mountaineer said that it requires anywhere between 300,000 and 500,000 euros to permanently install metal hooks or rock pitons by drilling the rocky spur. With metal railings, it can be used by larger groups and heavily loaded Sherpas who supply tonnes of tents, foods and oxygen cylinders up to Camp 3 and Camp 4, the climbers’ resting points.

“To date, the Khumbu Icefall is considered one of the most dangerous climbing spots in the world,” said Pasang Nuru Sherpa, who plans to climb Everest for the 15th time next year.

Experienced Sherpa guides fix ladders over the vast gaps in the Khumbu Icefall where there are seasonally shifting and changing crevasses.

A team of icefall doctors first prepare the route through the Icefall by installing hundreds of ladders across crevasses.

“For high-altitude Sherpa climbers, it takes around four or five hours to navigate the icefall,” said Pasang Nuru. “This is a pilot project. If it is successful, it will not only lessen the burden of high-altitude workers but also prevent deaths.”

“It’s difficult to climb the rocky spur but it’s far better than walking through the Icefall. It’s not tricky either. This route is safe,” said Pasang Nuru. “If the new route proves well, someone should fund it. This is a big project. We are expecting the government’s support as well.”

Marc wants to name the new route Sundare to pay homage to a late Sherpa guide who inspired him to climb Everest and break a speed record in 1988.

Marc has climbed six of the world’s 14 mountains above 8,000 metres—three of the mountains in a single year.

His first eight-thousander was Gasherbrum II in Pakistan in 1975. He made the first winter ascent of Dhaulagiri in December 1987.

“I am determined. I am coming back in spring next year to test the life-saving project,” said Marc.

On petro business, policies have been utterly inconsistent for many years