Government data show a downward spiral, and with uncertainties caused by Covid-19, economists say the country will hugely struggle to escape a negative growth this fiscal year.

Nepal faces a huge challenge when it comes economic recovery in light of the Covid-19 pandemic. Post File Photo
bookmark

Nepal saw a massive growth slump in the third quarter of the last fiscal year 2019-20–to 0.8 percent–due largely to negative growths in at least five sectors, according to estimates of the Central Bureau of Statistics made official on Sunday.

Economists say less than one percent growth observed in the third quarter in the last fiscal year could mean a further devastating impact on the economy in the fourth quarter [mid-April to mid-July] when the country was entirely under the lockdown.

The government imposed the nationwide lockdown to contain the spread of the coronavirus on March 24, which was lifted on July 21.

There now are concerns of a negative growth in the last quarter in a prelude to a recession that may continue through the ongoing fiscal year that started in mid-July.

“A negative growth is imminent in the fourth quarter. But more than that we fear the growth rate may hit negative territory in this fiscal year as uncertainties continue,” said economist Bishwambher Pyakurel, who has served many multilateral agencies like the World Bank, Asian Development Bank and the United Nations as an international consultant. “Nothing is looking good–neither the recovery plan nor the roadmap.”

Mining and quarrying, manufacturing, construction, wholesale and retail and hotel and restaurant sectors witnessed negative growth in the third quarter of the last fiscal year.

Growth in the first and second quarters of the last fiscal year, too, were not encouraging compared to the fiscal year 2018-19.

Economists say the government’s target of 7 percent this fiscal year is now almost impossible and the figures released by the bureau also speak volumes. 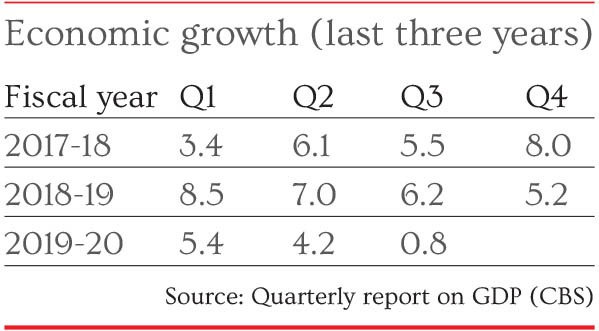 Even though Yubaraj Khatiwada, who resigned as finance and communication minister on Friday, presented the budget for the current fiscal year on May 28, amid the pandemic, he set an overly ambitious target of 7 percent growth, raising many an eyebrow, as countries across the world were revising their target amid the virus spread.

“Actually, the first two years of this government were a missed opportunity, as it failed to lead the economy in the right direction,” said Jagadish Chandra Pokharel, former vice-chairman of the National Planning Commission. “The government kept on talking big and making tall promises, but it desperately failed when it came to delivery.”

The 15th plan that came into implementation since fiscal year 2019-20 also targeted a double digit growth from the current fiscal 2020-21, and an average growth of 10.1 percent in the next five years starting from fiscal 2019-20.

Despite some scepticism of critics, the government targets did not look unrealistic, for conditions were quite favourable. Nepal Communist Party leader KP Sharma Oli led a stable government with almost two-thirds majority in Kathmandu. His party led governments in six of the seven provinces and most of the local units. There has been uninterrupted electricity supply. Labour issues in the industries, which used to be the bane of Nepal’s economy, had been sorted out.

The economic growth, however, plunged into a downward spiral since the second year of the current government, according to data of the Central Bureau of Statistics. Situation deteriorated further after the pandemic hit the country. The bureau said in April that the overall growth for the last fiscal year is expected to hover at 2.27 percent, a forecast made before Sunday’s third quarter estimates, despite the government’s target of 8.5 percent.

Terming Nepal’s growth outlook in fiscal year 2020-21 uncertain, the World Bank said in its report ‘Nepal Development Update’ in July, “should cases in Nepal continue to rise and should a rebound in economic activity in the country’s major trading partners and remittance-sending countries be delayed, growth in this fiscal year 2020-21 risks turning negative, with a contraction of 2.8 percent possible.”

Pyakurel said that since the fourth quarter was totally impacted by Covid-19, it wiped out what Nepal had achieved in the first and second quarters.

“In the fourth quarter, 90 percent of the small and medium enterprises which contribute 22 percent to the country’s gross domestic project remained shut,” Pyakurel told the Post. “In the tourism sector, nearly one million people are out of work.”

A central bank study showed 61 percent of total industries surveyed were completely closed down during the lockdown while 35 percent were partially open.

“As per the Agriculture Ministry and World Food Programme statistics, 23 percent of the population are deprived of food,” said Pyakurel.

Pyakurel said Nepal’s economic growth for the last fiscal year is not likely to cross the 1 percent mark, given the overall scenario and data, including those provided by the World Bank.

Policymakers in the Oli administration, however, have defended the performance of the current government on the economy.

Puspa Raj Kadel, vice-chairman of the National Planning Commission, said that the downward spiral in growth rate observed in the last two years should not be entirely taken negatively, as growth rates in successive quarters of those years were based on increased size of the economy.

“When the economic size increases, it affects the growth rate because there is a higher base to grow,” said Kadel. “In earlier years, growth remained high due to the lower base of the economy after it was affected by the devastating earthquake.”

He admitted that growth could not be achieved as targeted at least in the current fiscal year even though the economy was on the right track before the pandemic.

Officials at the planning commission, however, have started to discuss a potential revision in the growth target for the 15th plan (2019-20 to 2023-24).

“We are studying the impact of the pandemic on the economy and also holding internal discussions on potential revision in the growth target,” said Kadel. “In fact, revision has already begun with a reduced growth target for the current fiscal.”

Even though the first virus case was reported in December 2019 in Wuhan, China, Nepal woke up to the pandemic late. Even as the virus spread across the world, Nepal reported its first case on January 23. When the country went into lockdown on March 24, the country had just two Covid-19 cases.

The number of infections started to rise after the government lifted the lockdown on July 21. A month later, prohibitory orders were issued in Kathmandu Valley from August 19 midnight and restrictions are still in place.

Economists say it will be wrong to attribute the third quarter slump just to the Covid-19 pandemic and subsequent lockdown, as there was a lockdown for just three weeks in that quarter.

“The ground reality is different from what the government is presenting on the country’s economy. The situation is far worse than we have thought,” said Pyakurel. “We cannot blindly trust the government’s data. It needs fair and transparent review by international agencies.”