Here’s how to spend two weeks in Mundhum trail, the preeminent destination of Kirati culture

Khotang hosts one of the newest trails—Mundhum trail—that charts through many eastern hilly districts. Trekkers on the Mundhum trail. Courtesy of Ramesh Rai
bookmark

The word “Mundhum” finds its roots in kirati culture and history; it’s an oral guide to the kirati way of life and holds more traditional implications than religious tones.

It is this fact that’s behind the christening of a new and up-and-coming trekking trail in Nepal’s eastern hills, the Mundhum Trail. The trail charts hilly districts such as Khotang, Solukhumbu, Bhojpur and Sankhuwasabha.

The trail begins at Halesi, 223km from Kathmandu. There are rewards here from the get-go. Halesi, arguably the most prized destination in the trail, is most famous as a religious site for Hindus, Buddhists, and kiratis, coming alive during festivities such as Sakela, Shivaratri, Bala Chaturdashi, Ram Nawami and Teej, among others. Places such as Panchadevi, Kakani, Bhairavthan, Kalikasthan, Murdhum Cave, Maratika Gompa and Mahadev Cave see visitors in droves during these festivals. It is believed that the Mahadev Cave hosted Gautam Buddha for his penance. Most visitors to Halesi like to take a dip in the Dudhkoshi River in Jayaram Ghat in the town.

But there’s more to Halesi than its religious heritage. Halesi, arguably the most prized destination in the trail, is most famous as a religious site for Hindus, Buddhists, and kiratis. Dambar singh Rai/TKP

The Halesi area is often called a “world of caves”, an apt moniker given that it is home to about a dozen caves. Mythologies associate these caves to tales related to gods and goddesses. Gupteshwore cave, a three-hour walk east from Halesi, for instance, is believed to be a haven for the fugitive Lord Shivaji. After about an hour’s walk uphill, one can get to a place called Tuwachung Jayajum, which is popular for mountain sights. This is one of the veritable detours one ought to consider while taking the trail. This historical place is where kirati tradition originated from according to kirati text, which is why the place is held in high regard by the kirati people.

Likewise, a two-hour walk from Halesi gets one to Satteshwore Cave, and Sitaleshwore Cave closeby. Both of these caves are believed to have been blessed by Lord Shiva, according to Gajurman Rai, chair of Halesi Mandir Committee. A few hundred metres uphill is Kakanithan and Kotdanda, both making for a vantage point overlooking distant hills towards north and verdant fields towards the south.

Equally popular destinations are the Temke peak, Mainyu peak, Silichung peak, and Salapa Pokhari, the highlands offering majestic views of the sunset, snow peaks and wildlife. In the short span since it opened, Mundhum trail is placed as one of the foremost 100 tourist destinations in Nepal, according to Ramesh Kumar Rai, a tourism enthusiast.

The trail’s cool atmosphere and soul-enriching sceneries is the cherry on top. Given the trail is a relatively recent addition to Nepal’s trekking trail circuit, it is fairly well-facilitated; hotels and resting spots abound, so one need not worry about lodging and food, according to Iwan Rai, mayor of Halesi Tuwachung Municipality. 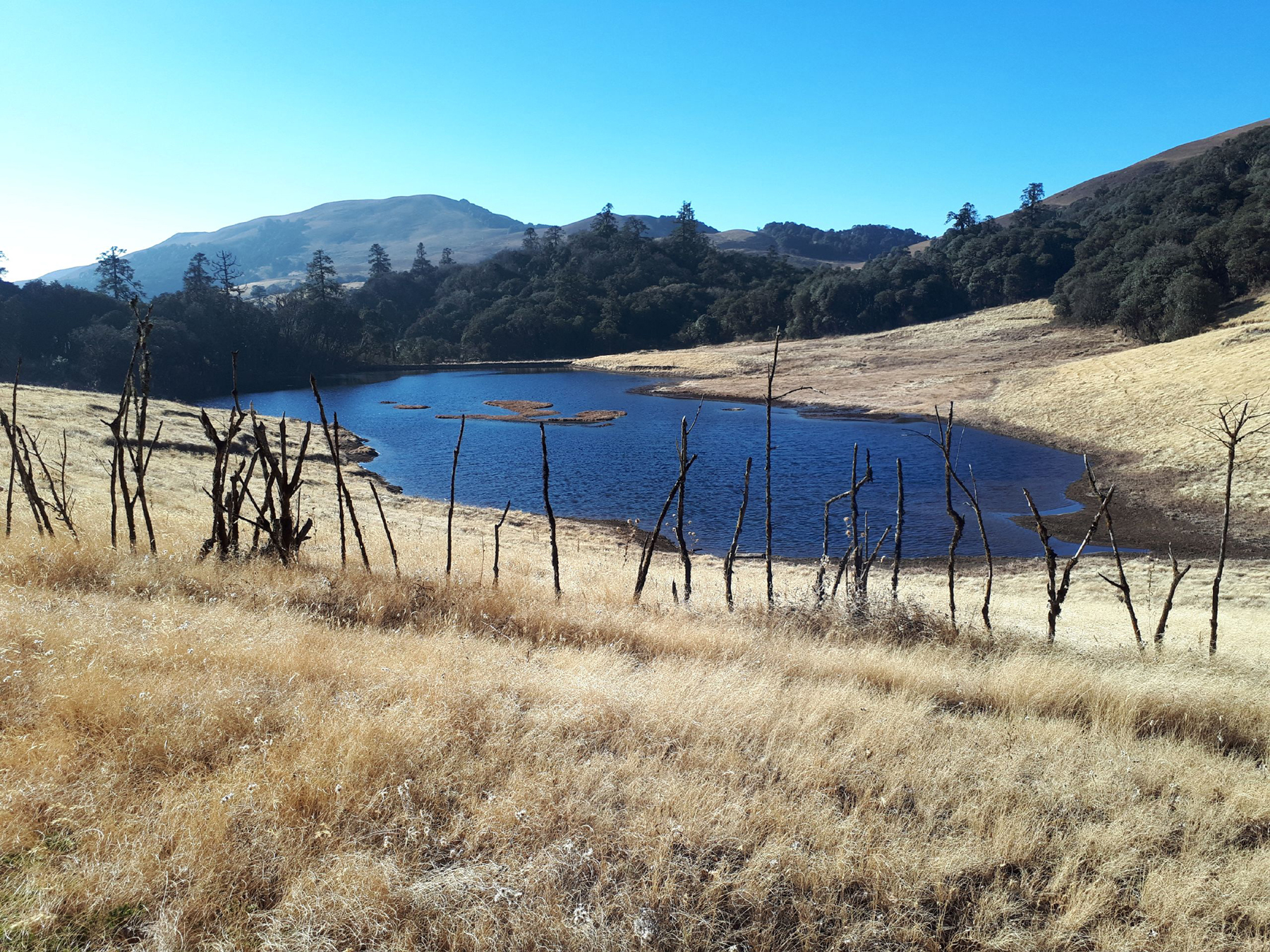 Hanspokhari is popular for chauri milk, ghee, and curd among other local culinary items. It is quite scenic as well, overlooking many mountain peaks across the hill. Courtesy of Ramesh Rai

After spending the first few days in Halesi, depending on the time schedule, the next destination on the trail for trekkers is Diktel, the district headquarters. It is advisable to stay the night in Diktel and then trek to Rupakot the next morning which is a hotbed for medicinal herbs of various kinds and is most frequented for the mountain sights it offers. The same day trekkers can head to Chakhewa, which lies in the foothills of Temke peak. The peak itself is 3,165m above the sea level. There are several hotels at Chakhewa to spend the night in but for those looking for a more adventurous stay can pitch a tent in the area. You can choose to stay a couple of days at Chakhewa and make a trip to Temke Peak which features on almost every mountain lover’s must-visit peaks.

Dhotre Deurali is the next rest stop on the trail, which could fall on the third or the fifth day depending on the time spent at Halesi. Dhodre Deurali is popular for local food and drinks. Trekkers, however, have to make their own arrangement for a stay since there are no hotels or homestays here. A night of camping sounds like the best option while here.

After a night’s rest at Dhotre, start early morning towards Maiyu peak in Hanspokhara via Bhedigoth. Hanspokhari is popular for chauri milk, ghee, and curd among other local culinary items. It is quite scenic as well, overlooking many mountain peaks across the hill.

From Hanspokhari the trek to Rawadhap through Lahure Bina is a relatively hard trek with rocky trails. Trekkers are advised to take multiple rest stops on the way to avoid exhaustion. The next day will have you on your way to Salpa Base Camp where a day’s rest is recommended as preparation for the next phase of your trek.

The next day, start early towards Salpa Lake which is only a 20-minute hike from the Base Camp. This lake holds religious significance with Salpa Devi mandir located in the vicinity of the lake area.

A trip to Salpa Lake is incomplete without a trek to Silichung peak which is the highest peak in the trail, so if you have time in your hands and adventure in your soul, take a trip to the peak. Head to the Base Camp after your peak visit and take a night’s rest. The next morning retrace your steps back to Maiyu Hanspokhari with a night stop at Hyakule peak.

From several points across the trail, one can observe mountains over 8,000m height such as Everest, Kanchenjunga, Makalu, Lhotse, Cho yu, and 45 more peaks of lesser height. Courtesy of Ramesh Rai

From Maiyu Hanspokhari your next stop will be in the neighbouring Bhojpur district and while at Bhojpur stop by at the Mundhum Homestay. This homestay is highly recommended for a wholesome experience of the kirati food, culture and lifestyle that sums up this extensive trail across the east. Hereon, charting a route is entirely up to you. You can either go back towards Diktel retracing your steps on the trail or spend a few days in Bhojpur and fly back to Kathmandu.

Ramesh claimed that Tenzing Norgay Sherpa and Edmund Hillary used a portion of this trail when they summited Everest. “This is a virgin trekking route, unsullied by urbanisation,” he said. “This trail could be instrumental in promoting kirati culture, society and lifestyle.”

The trail has several hotels that serve food such as pork curry with leafy greens, thepla (made of maize), jaukosaatu (powdered barley), kodokoraksi (millet alcoholic brew), and kaalij sukuti (wild pheasant dry meat) and local chicken. One can also taste Yak milk and ghee, and honey from wild honey bees.

Rai said that the trail is undergoing a facelift currently. There are signboards, resting spots, and homestays being constructed and developed with financial aid from the Tourism Board and the Ministry of Tourism. New facilities like drinking water taps and latrines are being added. Rai added the trail also holds the potential to host adventure sports such as ultra-marathon, sky race, mountain cycling, and paragliding, among others.

The 100km long route takes about 12 days to complete and, needless to say, it’s totally worth it.

Getting there: To get to Halesi from the capital, one can either opt to take a bus or a 25-minute flight to Lamidanda Airport.

Where to stay: Given the trail is recently-opened, it is well-facilitated; hotels and homestays abound across the trail.

Detours: The trail features plenty of caves that experts say have relation to Hindu gods and goddesses. Editor’s note: The map on this page shows only a rough outline and Khotang region of the Mundhum Trail.

Dambar Singh Rai is the Khotang correspondent for Kantipur Publications.