Experts say import-promoting policies, high production costs, change in consumer behaviour and lack of restrictions on import are to blame as the government fails to support farmers.

Nepal's agricultural goods import bills continue to expand, ballooning to an all-time high crossing Rs250 billion in the fiscal year 2019-20 as a result of the country’s import-promoting policies, high production costs and change in consumer behaviour, among other factors.

While the country’s overall imports dropped by 15.63 percent to Rs1.19 trillion in the last fiscal year, ending mid-July, due to Covid-19 pandemic related restrictions, agricultural goods imports continued to increase. The share of agro products in the total import bill has swelled to 21 percent.

Agriculture economist Devendra Gauchan said that the government has been putting no restriction on imports.

“Although in a liberal economic policy curbing the imports of cheaper goods is against consumer rights, we could still make it more difficult for imports with strict quality check and imposition of quarantine,” said Gauchan, also the director of Nepal Agriculture Economic Society

“The government had imposed mandatory quarantine at the borders to stop imports of vegetables that have high levels of pesticide residues,” he said. “But that has been lifted now.”

The problem is also factors that affect productivity in Nepal.

“There is high land fragmentation, and the cost of agricultural labour is high,” said Chandan Sapkota, an economist. “Absence of scientific land reform to enable proper utilisation and distribution of land is a factor. Smaller agricultural holdings are increasing but larger holdings are decreasing, and this obviously results in low production.”

According to the Department of Customs statistics, cereal tops the list of agro imports followed by edible oil, vegetables, fruits and nuts and seeds. Cereal import bill amounted to Rs56.88 billion, almost a fifth of the total agriculture import bill.

Imports of maize have been growing at an alarming rate and it's due to the demand of livestock feed. Besides, Nepal spends Rs15 billion on the imports of animal fodder alone.

“The rise in the income mainly from remittance has given people a choice,” said Gauchan.

Choice is the reason behind the growth of rice imports too, according to Rameshore Khanal, a former finance secretary.

“Nepal is importing fine varieties of rice mainly due to the expanding number of middle-income Nepalis who prefer to eat basmati rice, and Nepal doesn’t grow such fine rice in sufficient quantities,” he said. “It’s a preference. People will buy what they like.” 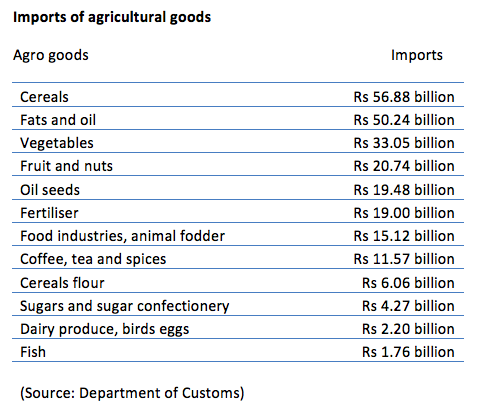 After cereals, the biggest import bill is for vegetable fats and oils which stands at Rs50.24 billion, up from Rs37.12 billion in the previous fiscal year.

A significant share of this is taken by the import of crude palm oil which is then exported to India, taking advantage of the South Asian Free Trade Area (SAFTA), according to government officials.

As the SAFTA agreement provisions zero tariffs on goods exported from underdeveloped countries like Nepal, Nepali traders have been importing crude palm oil from other countries paying minimum tariffs and then exporting the finished product to India with zero tariffs.

“It’s sad to know that the vegetable import bill is increasing every passing year. In vegetables, we can be self-sufficient within six months,” said Golyan, who has acquired 35 hectares (220 bighas) of land in Jhapa for commercial fruits, vegetables and cereal production. “The basic things that we lack are the basic infrastructure like processing zones, cooling centres and agriculture rural roads.”

According to Gauchan, Nepal can learn some lessons from India which provides massive subsidies to farmers. “It has become cheaper to buy from India than produce inside the country due to high production costs,” said Gauchan. “Traders import in larger volumes, as a result it becomes cheaper as transaction costs are low.”

Meanwhile, in Nepal it is difficult being a farmer.

“So basically, it’s an import-promoting policy of the government that is stopping the country from being self-sufficient on its production,” said Gauchan, the agriculture economist. “Because the government is focused on making revenue–no matter from where it comes.”