The Manila-based bank says the economy will likely expand by 4.7 percent in 2022-23, down from an estimated 5.8 percent last year.

The Asian Development Bank has downgraded Nepal’s growth forecast for the current fiscal year as the economy takes a beating from high inflation, slowed trade and monetary tightening.

According to an update of the flagship economic publication Asian Development Outlook 2022, other factors affecting gross domestic product (GDP) growth are increasing cases of dengue fever across the country's strained fragile health system, and the global geopolitical turmoil that may further dampen growth prospects.

Import control measures have squeezed economic activities in the country. Even as Nepal’s biggest festivals and holiday shopping season are right around the corner, market and consumer confidence is at a low, traders and economists say.

The World Bank too has painted a gloomy picture of Nepal’s economy. As per the budget statement, the government has set its sights on 8 percent growth in the current fiscal year, almost double the World Bank projection.

According to the Nepal Development Update released by the World Bank in April, Nepal’s economy is expected to grow by 4.1 percent in 2022-23.

"Every economic indicator, except for a few, is not performing. A layman can understand in which direction Nepal’s economy is heading.”

These are the bases: Credit crunch, high-interest rates due to monetary tightening and underperforming stock market and farm sector.

Other indicators fuelling low growth are inflation reaching near double digits, trade restrictions, squeezed real estate sector and low revenue base due to an import ban.

Besides, tourist numbers have not improved, and the government’s capital expenditure is very dismal.

A rebound in tourism in Nepal could be interrupted by the rising dengue fever caseload, aviation safety measures, and the general and provincial elections slated for November 20, insiders say.

After dengue killed more than a dozen and a half people and infected thousands, the Ministry of Health and Population is readying to declare a dengue epidemic in the country.

The deadly virus has been recorded in 75 out of the country's 77 districts.

The monetary tightening has also become worrisome for the economy.

Nepal’s banks have been raising borrowing costs since August to try to cool the economy and ease price inflation.

The Federation of Nepalese Chambers of Commerce and Industry on Thursday issued a statement criticising banks' and financial institutions' move to increase the interest rates.

On September 17, most of the banks reported an interest rate of 12.13 percent for fixed deposits.

The rise in lending rates will impact entrepreneurs and businesses already hit by Covid-19 followed by the external factors, the key private sector organisation said.

Fears are rising that the slowed economic activities and hike in interest rates will make the country sink into recession.

But amid the gloomy scenario, there are some bright spots.

The industry and manufacturing sectors are expected to grow on the increased generation of hydroelectricity and capacity utilisation of factories. The provincial and federal level elections in November will stimulate spending.

“There are hopes that hydroelectricity generation and spending in the upcoming elections will boost economic growth to some extent. Even then, we don’t think the economy will grow by more than 5 percent,” said Acharya. “Economic activities have been virtually squeezed.”

While direct impacts from trade and financial exposure to Russia and Ukraine are minimal for countries like Nepal, spillovers from rising commodity prices, higher borrowing costs and weaker external demand are significant. 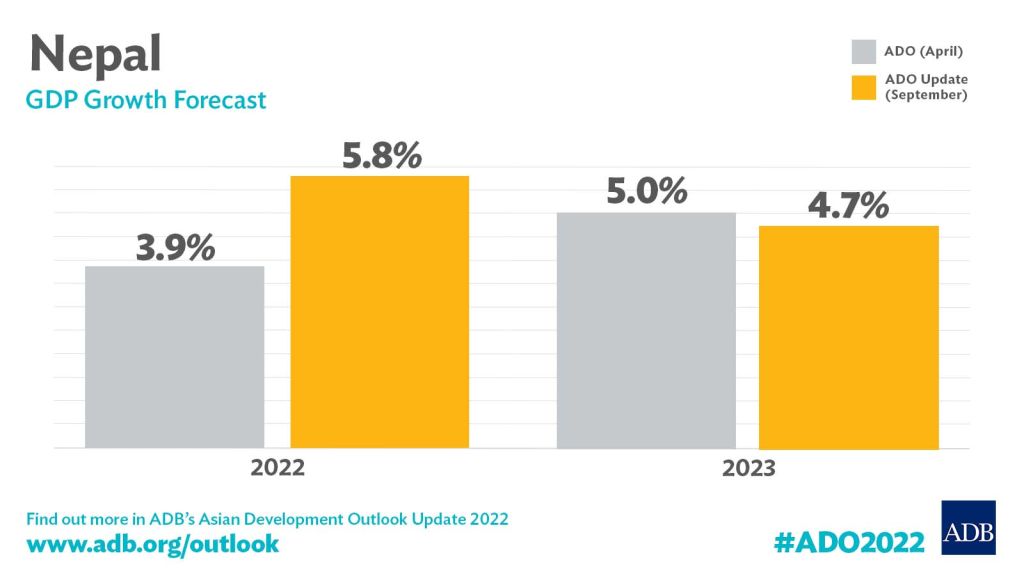 In Nepal, economic recovery is running into headwinds from accelerating inflation.

Higher interest rates help to fight inflation by raising the cost of borrowing and thereby encouraging people and businesses to borrow less and spend less.

“In a country like Nepal, an interest rate hike will curtail private sector investment as the profit margin is narrowed,” said Acharya. “No one will invest if there are no returns.”

The Asian Development Bank says the GDP growth is forecast to moderate largely reflecting the tight monetary policy necessary to stem a rise in imports, a marked decline in foreign exchange reserves and inflationary pressure.

“Downside risks to growth may arise from further stringent measures by the authorities that may be necessary to curb import, which will depress domestic production and consumption, adversely affecting growth,” said Arnaud Cauchois, the Asian Development Bank’s Country Director for Nepal.

The Asian Development Bank said in its update highlights that agriculture growth would likely be boosted owing to a normal monsoon, but fertiliser shortages may adversely affect paddy production.

The report said that services growth may moderate owing to a slowdown in real estate and wholesale and retail trade activities, induced by credit control measures and a hike in interest rates.

"Nothing works in the economy without price stability," said Acharya. “Inflation is still rising steadily. We need inflation to come down."

The country’s current account deficit is estimated to narrow to 8.1 percent of GDP in the current fiscal year, owing to moderation in merchandise imports amidst stable remittance inflows.

Out-migration for foreign employment has picked up, exceeding the pre-pandemic level. Imports related to Covid-19 will have substantially decreased, and falling oil prices will help lower the import bill for Nepal.

“The policy of import control for a long time will dampen the economy, though it is justifiable for a short term,” said Acharya. “The import ban is not a remedy.”