Samyak Mahadan, an alms giving festival supported by the Samyak Guthi, has been around for more than a thousand years.

It was early, around 6 am, when Sabita Dhakwa joined the line in Nagbahal with her family to offer alms to 127 Dipankar statues. The line was quickly filling in, and unlike the usual quiet Patan mornings, the bahal was buzzing. There were baskets full of packet jaki (rice) and mari (sweets) everywhere. And the elders had their pockets full of money to distribute to the many families and representatives of bahals and bahis around Patan that had assembled with their deities.

This was exactly five years ago, but Dhakwa remembers details clearly because she spent the day before preparing for Samyak Mahadan, a centuries-old tradition that takes place only every five years. The sole purpose of the festival is to encourage people to be altruistic and to live a compassionate life.

“We were lucky, as we took an inside route, so we didn’t have to wait in the line for long. But many people had already arrived before us fearing that the queue would have them standing for hours,” says Dhakwa, a local of Patan. “The festival is quite important for Buddhist Newars, as it has become a way of practising daan (an act of giving and sharing) dharma. A festival that also has over the years nurtured our faith,” she says.

The Samyak Mahadan festival celebrated once every five years in Patan, every 12 years in Kathmandu and every year in Bhaktapur is an alms giving festival that venerates deities like Dipankar Buddha, Basundhara, Arya Tara and other Bodhisattvas and Buddhas. And over the centuries, since its initiation in Nepal Sambat 135 (1015AD), the festival has stood the test of time, becoming more prominent, organised and grandiose—owing to the strength of the monasteries organising the festival and the guthi system. In Patan, the Samyak Mahadan festival is organised by Hiranya Varna Mahavihar, which many know as the Golden Temple, through an intricate, institutional practice. “Every month the Vihar appoints two priests. One a young boy who should have just finished his chudakarma ceremony, a coming of age festival, and the other an adult who becomes the assistant priest for the boy, bafacha,” says Pushpa Raj Bajracharya, one of the organisers of this year’s Samyak festival.

The 12 assistant priests of the year then come together to organise a sangha bhoj (feast) in Nagbahal at the end of the lunar calendar, while in every five years they host the Samyak festival. The festival is supported through the budget provided by the Ittilihane (pronounced ‘Itti-lah-nay’) Samyak Mahadan Ayojak Samittee, a unit of the Vihar and funds donated to the Vihar through various entities. “It takes around two to three million to organise the festival for the organising team,” says Bajracharya, who served as a priest in the Vihar for a month this year.

Until a few days before the festival, the 12 assistant priests were coordinating various groups to package jaki in plastic to distribute to people who will be coming to receive the offering during the festival. “We have now packed about 2500 rice packets as we estimate that there will be more people who will be coming to the festival,” says Bajracharya. The mahadan will follow in two parts, first with the commoners giving alms and second with the organisers distributing the same. 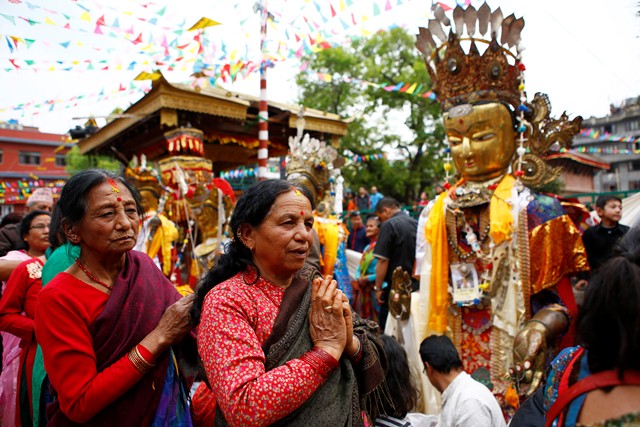 However, only those monastic families and communities who had listed down their names at the Vihar to participate in the Samyak Mahadan with their respective Dipankar statues (many that have been passed down from their ancestors) are allowed to sit to receive the daan. “For many communities and families this is a passed down tradition they must continue,” says Bajracharya. The participating members can use the daan for anything. “But some also use the money to organise communal feasts, while some donate it to the other institutions, but the most important part of the festival is for people to understand the value of sharing and giving,” says Bajracharya.

Every year in the process of organising the festival, many also recount different tales behind the festival’s beginning. “It is believed that during the time of king Bhaskar Dev, a Thakuri ruler, one of his sons, Bharibharo, was a poor king. He was poor because he was generous to his people,” says Bikash Ratna Dhakwa, co-organiser of the festival. “But to hide the fact that he was poor from his people and his wife, he used to fill his storehouse with cow dung and lock it, telling people he had treasures inside. Then, one day, because of his faith and kindness, the dung turned into gold. Amazed with the incident, Bharibharo organised the Samyak festival to share his wealth with the people. It is believed that we have been celebrating the festival since then,” says Dhakwa.

For many years until 1805, the festival used to be celebrated every year. “The festival started being organised once every five years after the Samyak Guthis started struggling with managing resources for the festival,” says Dhakwa.

This year the Patan festival will be marking its 472nd anniversary. And with the years of experience, the festival has expanded in size and celebration. According to Bajracharya, there were more than a million people who had come to the festival in 2016, and this year he expects the number to increase given the amount of attention the festival has been receiving from people. Two days before the festival, a procession of elders from the Vihar walk around Patan inviting communities to participate in the Samyak festival.  Anish Regmi/TKP

“Our experience has made us more organised, this year we have also printed out schedules so that it will be easier for people attending the festival,” says Bajracharya. The organising team has also made sure that the participating members who will be receiving the daan, bring the right deities to the courtyard.

On the main event day, the Vihar’s Dipankar statue will also be placed near the lingo put up to mark the start of the festival last Thursday.

Two days before the festival, a group of elders (aajus) from the Vihar, were going around the bahal and bahis around Patan, Kathmandu, Kirtipur, and Bhaktapur to invite the communities to participate in the Samyak Mahadan. The aajus walked under colourful umbrellas, as the younger ones bolstered their energy with dha and nyakhin baaja (musical instruments). And on every stop they made in the various bahals, one of the aaju’s read out the invitation before pinning it on the front entrance of the bahal.

Sabita Dhakwa, the local from Patan, will be revisiting the festival this year too distribute daan: “It will be a delightful and gratifying experience for those who come. It’s a sight to see: people queuing up to distribute the alms they bring with themselves.”

The Samyak Mahadan festival will start on Wednesday night and will continue till Thursday.