Can Afghan military turn the tide in Taliban fight?

US Defence Secretary James Mattis was filmed beside an open cargo door as he flew in to Kabul on Monday. It was a glamorous image, but he could scarcely have flown into the country on a less auspicious day.

US Defence Secretary James Mattis was filmed beside an open cargo door as he flew in to Kabul on Monday. It was a glamorous image, but he could scarcely have flown into the country on a less auspicious day.

In the morning both Defence Minister Abudullah Habibi and the Army Chief of Staff Qadam Shah Shahim had handed in their resignations in the wake of the Taliban attack on an army base outside Mazar-e Sharif on Friday. It was the deadliest single attack on a military installation in the entire 16-year history of the Afghan conflict.

When I was shown around the base the message was that although mistakes were made, the Taliban subterfuge had been particularly thorough.

The Taliban fighters arrived in Ford Ranger trucks painted in a perfect facsimile of Afghan army vehicles. They had full uniforms and plausible paperwork; one of the team was disguised as a casualty complete with a bloodied bandage around his head and an IV drip in his arm.

But even this elaborate ruse should not have resulted in the carnage that ensued. The 10 Taliban attackers are believed to have killed around 170 Afghan soldiers. It was a major blow to morale in the military, but also in the country at large. 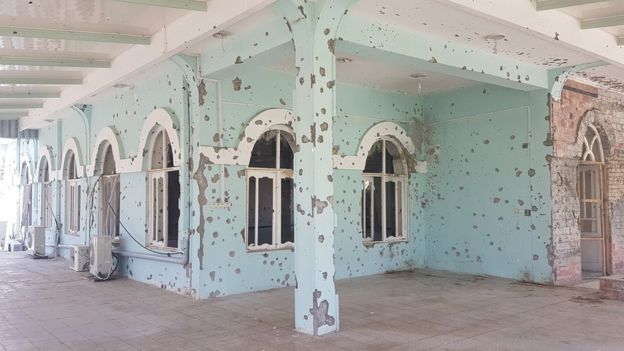 No surprise then that the two top-level resignations were just the beginning of a unprecedented shake-up of the military hierarchy. Four corps commanders - including Major Katawazai who was in charge of the base that was attacked - were suspended. Meanwhile a further eight military personnel are being investigated, allegedly on suspicion that the Taliban attackers had help from inside the base.

It leaves the Afghan military rudderless at a particularly dangerous time. The Taliban now control more than a third of the country and traditionally there is an upsurge in violence as Afghanistan's bitter winter comes to an end: the so-called "fighting season".

Officially the spring offensive has not started yet this year. Nevertheless last month the Taliban retook the key district of Sangin in the southern Afghan province of Helmand; a significant strategic advance.

Public statements about the US mission have increasingly focused on the effort to tackle IS and other international terrorist organisations in Afghanistan.

But the truth is the US recognises that the main threat to the Afghan government comes from the Taliban, and so the overwhelming focus of American involvement here remains anti-Taliban.

Taliban successes in the almost two and a half years since the Nato combat mission in Afghanistan officially ended have led senior Afghan officials and American top brass here to argue that the US needs to boost its training and assistance mission. The suggestion is a few thousand more troops are needed. 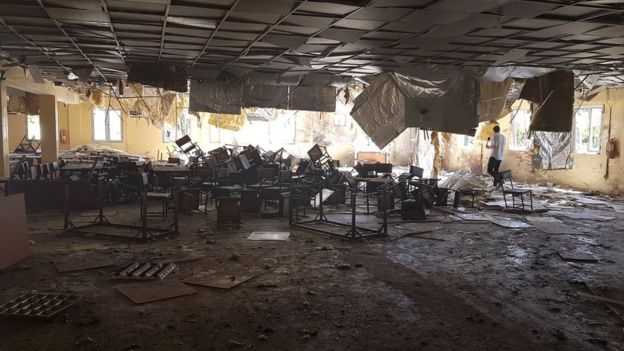 Damage to the base canteen shows the ferocity of the attack

That will certainly have been on the agenda of Defence Secretary Mattis as he met the Afghan president and other senior figures to discuss the Trump administration's evolving strategy here.

But many military analysts doubt that this will be enough to turn the tide. Last year a record number of Afghan forces were killed - 6,800 in total. That is three times the losses of American forces during the entire 16 years of this conflict.

And many thousands more Afghan military personnel were either invalided out of service or simply deserted.

It emphasises once again the key problems the Afghan forces face: inadequate training and a lack of commitment from recruits, exacerbated by terrible conditions, corruption in the officer class and poor air support.

Today the office of the chief executive of Afghanistan, Abdullah Abudullah, announced a new defence minister had been appointed. He was named as Tariq Shah Bahrani.

Whether his appointment will be endorsed by parliament is another matter. The National Unity government rarely lives up to its name. During the almost three years it has held power it has been marked by deep divisions and open disagreements.

With the army in turmoil, unity at the top levels of government is needed if a successful push back against Taliban advances is to be achieved. Whether the current administration will be able to deliver that is another matter.