Saudi Arabia's foreign ministry has said it is a matter of "great concern" that 9/11 relatives in the US may be able to sue the kingdom for damages.

Saudi Arabia's foreign ministry has said it is a matter of "great concern" that 9/11 relatives in the US may be able to sue the kingdom for damages.

On Wednesday the US Congress voted for a law allowing families of nearly 3,000 people killed in the attacks to sue.

In doing so they overrode a veto by President Barack Obama, who said it would set a "dangerous precedent".

Fifteen of the 19 hijackers that day were Saudi nationals, but the kingdom has denied any role in the attacks.

In a statement, the country's foreign ministry said: "The erosion of sovereign immunity will have a negative impact on all nations, including the United States."

Their argument parallels the one made by Mr Obama. He said on CNN after the vote that the law set a "dangerous precedent" and could lead to the US being opened to "a situation where we're suddenly exposed to liabilities for all the work that we're doing all around the world and suddenly finding ourselves subject to private lawsuits". 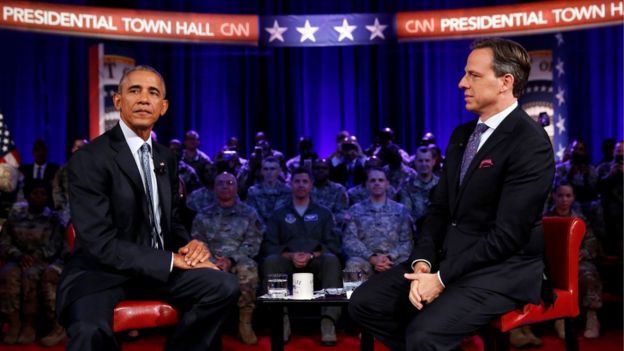 Meanwhile, leaders of the Republican party in Congress have said they want to reconsider the law. The Senate majority leader Mitch McConnell admitted that lawmakers had not understood the possible consequences of the legislation.

"Everybody was aware of who the potential beneficiaries were but nobody really had focused on the downside in terms of our international relationships,'" Mr McConnell said.

'The right thing to do'

On CNN, Mr Obama also suggested that that voting patterns in Congress were influenced by political concerns.

"If you're perceived as voting against 9/11 families right before an election, not surprisingly, that's a hard vote for people to take," he said.

"But it would have been the right thing to do."

Saudi Arabia, an oil-rich kingdom and key US ally in the Middle East, had lobbied furiously against the Justice Against Sponsors of Terrorism (Jasta) legislation.

It has stopped short of specifying how it might retaliate but has called on Congress to reverse the decision.

Relatives of those killed in 9/11 have welcomed the bill's passing.

"We rejoice in this triumph and look forward to our day in court and a time when we may finally get more answers regarding who was truly behind the attacks," said Terry Strada, national chair of the 9/11 Families & Survivors United for Justice Against Terrorism.

Sri Lanka on the edge as debt burden mounts

Djokovic has to comply with rules to go to Spain, PM says