Officials in Indian-administered Kashmir say 36 people have now died during protests following the shooting of a well-known militant leader.

Officials in Indian-administered Kashmir say 36 people have now died during protests following the shooting of a well-known militant leader.

About 1,500 people are being treated for injuries after the clashes between pro-separatist protesters and police.

Burhan Wani, 22, died in a gunfight with the Indian army on Friday.

Chief Minister Mehbooba Mufti made a televised appeal for calm following days of clashes. The violence is the worst seen in the region for years.

Disputed Kashmir is claimed in its entirety by both India and Pakistan and has been a flashpoint for more than 60 years, sparking two wars between the countries.

Within the disputed Muslim-majority territory, some militant groups have taken up arms to fight for independence from Indian rule or a merger with Pakistan. 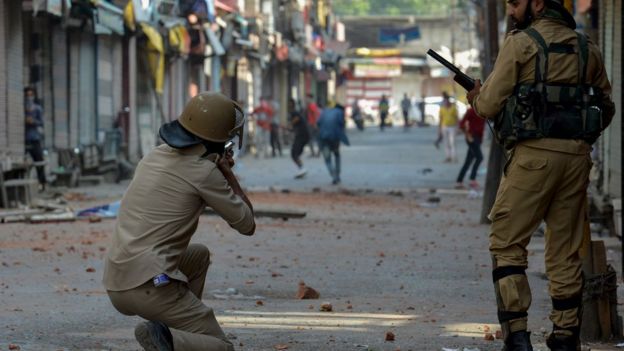 Some 800 extra troops were being sent to help restore order in the region, it was announced earlier in the week.

Most of those killed have been young men aged between 16 and 26.

Doctors fear that a severe lack of blood and life saving medicines could cause more deaths. They say more than 100 people who have been hit in the eyes by shotgun pellets may lose their sight.

A curfew is still in force across much of the region and mobile internet and train services remain suspended.

On Wednesday, Ms Mufti made a direct appeal to the parents of young people to keep their children at home, and prevent them from joining protests being "instigated" by those who "preferred bloodshed and violence".

The state government has said it will investigate reports of excessive police violence towards unarmed protesters.

The last bout of serious violence in the region was in the summer of 2010, when more than 100 people died in anti-India protests, which broke out after police shot dead a teenager.

EU set to promise Ukraine support but not quick accession

Gautam Adani, one of India’s most powerful men, suffers a rare defeat