Architecture has always distinguished itself from other art forms because it plays a functional as well as an aesthetic role, offering shelter, of course, but also shaping our daily experiences. Architecture also leaves behind monuments to moments in time, signifying in stone, glass, and steel the various layers of history that define the evolution of a place.

More often than not, when a person is travelling, their itinerary is often full of sightseeing architectural stunners—especially if they are design aficionados. But at times, a destination offers more than just a chance to glimpse a world-famous example of architecture. Every once in a while, you can actually stay the night in one. Hyatt Regency Kathmandu offers that and much more. With design elements that are at their visual best, Hyatt Regency Kathmandu engages, exhilarates, and inspires. Hyatt Regency Kathmandu is a distinct showcase of fine architecture and craftsmanship. The subtle fusion of creativity with novelty ensures modern-day comfort and convenience, yet with a flavour of the past.

The entire hotel is a blend of traditional Newari architecture with contemporary conveniences. Lifesize mythological animals believed to keep away evil spirits; welcome towers, and beautifully carved niches mark the entrance, guiding one into the hotel. The Water Court comprises lotus ponds, as does the entire entrance to the lobby area. When asked about the significance behind the concept, Arunima says, “Walking over water is considered auspicious, so the entrance is a mark of respect to all our guests.” 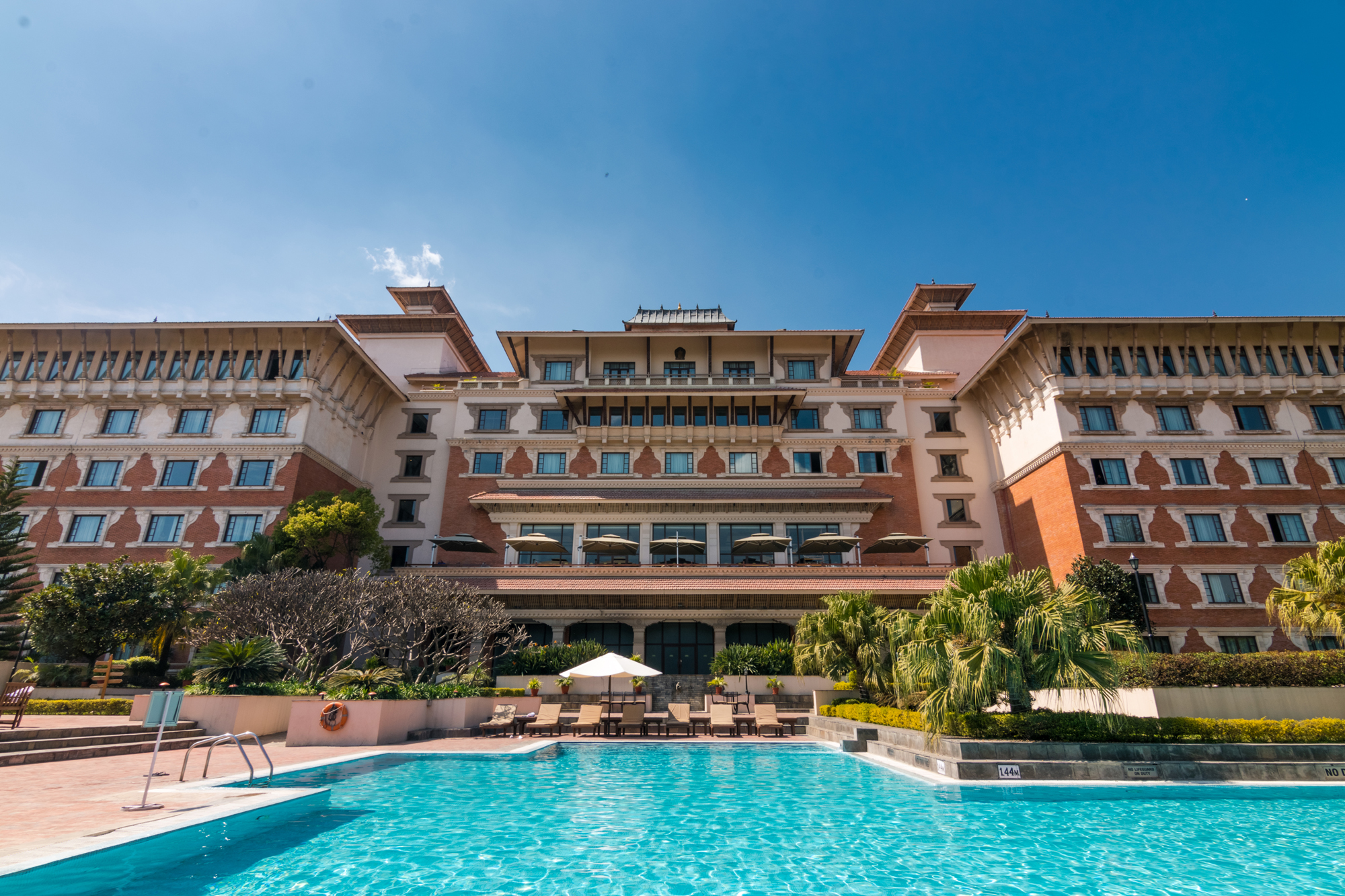 Hyatt Regency Kathmandu’s 280 rooms and suites enjoy views of either the Boudhanath Stupa or the hotel’s gardens and the surrounding mountain ranges. Four exciting restaurants and bars at the hotel also ensure the perfect dining experience with an array of cuisine options. The hotel offers over 938 sq m of impressive meeting space providing unparalleled business services to meet everyone’s needs. The hotel’s fitness centre, Club Oasis, features a well-equipped fitness centre, a health and beauty spa, outdoor swimming pools, a whirlpool, tennis courts and a 1.6 km jogging track. “More than a hotel, Hyatt Regency Kathmandu is a different world in itself,” says Arunima.

Bibek Bhittrikoti, the founding architect of Wondrous Artech’s, is on his first tour of Hyatt Regency Kathmandu. “This is the first time I’ve had a closer look at the architecture. Hyatt Regency Kathmandu has a modern architecture with a traditional touch,” he says. As he explored the property, he went on to explain the blend of modern and traditional aspects. “The plaza gives a feel of a public square of the Malla Era royal palaces whereas the temple courtyard is filled with Lichhavi Era stupas, resembling the courtyard of an ancient bihar,” he says. Agreeing to his observations, Arunima says, “The nine living chaityas in the Temple Court are replicas of shrines built between the 11th and the 18th centuries. It was researched by the historian Niels Gutschow. According to Buddhist philosophy, chaityas represent the universe, and each spire that encircles the chaitya symbolises heaven; the gods and goddesses are believed to be living inside the chaityas. A seating area has been built around the shrines for guests to learn about the legends of the living gods, as well as absorb the peace and serenity of the area.”

Today’s architectural monuments aren’t meant only to be admired from afar. Some of the world’s foremost buildings and properties have been designed in such a way that it is possible for fans to get up, close and personal with some of the most important design thinkers of the past and present. Similar is the case with Hyatt Regency Kathmandu. Through careful consideration, the shared spaces at Hyatt Regency Kathmandu are designed equally for the efficiency and pleasures of a luxury hotel experience. “Hyatt Regency Kathmandu is the perfect example of the proper use of contour landscape. Different blocks have been built around the original positioning of the land, which is why the lobby area looks like it is on the ground floor when viewed from the front, but it looks like it is on the second floor from the back where it actually is,” says Arunima. The ballroom is perhaps the greatest nod to its creator. Adorned with marble walls and minimalist midcentury furniture, the space is usually booked for wedding receptions and corporate events. No less extraordinary is the swimming pool that overlooks the seven-storey main building. “Every piece of a landmark here is built thoroughly keeping in mind the convenience of the guests. There’s something for everyone,” says Arunima.

Hyatt Regency Kathmandu possesses a quality—almost indescribable—that embodies design ingenuity, connection to a place, and, above all, imagination.

Pooja Lakhey is a lifestyle reporter for The Kathmandu Post.