Here are five places you should visit in Surkhet

Surkhet has its own several awe-inspiring sites that one can get to within an hour’s ride from the district headquarters, Birendranagar. Surkhet sees a massive number of tourists year-round, for the district makes for a gateway to several famous tourist destinations in the country. Kalendra Sejuwal/TKP
bookmark

Surkhet might not be the most romantic destination in Nepal or very popular, compared to other places like Rara and Shey Phoksundo that fall nearby. Yet Surkhet sees a massive number of tourists year-round, for the district makes for a gateway to several famous tourist destinations in the country.

It is where tourists setting out for a trip to Rara in Mugu, Shey Phoksundo in Dolpa, Chandannath in Jumla, and Panchakoshi in Dailekh drop by. Hotels in Surkhet are thus busy year-round, bustling with wide-eyed visitors.

Little may they know that Surkhet has its own several awe-inspiring sites that one can get to within an hour’s ride from the district headquarters, Birendranagar. These venues might not be well-known to outsiders, let alone foreigners, but they are worthwhile destinations, all of them with their unique characteristics.

Bulbule Lake, for instance. This time of the year, the lake comes alive with something other than its aquatic splendour. Nepalis might recall coming across the name in their General Knowledge books from secondary school. Or maybe from that iconic song from the Niruta Singh-starrer film Bandhaki—Surkhetma Bulbule Taal, Laaigo Maya Leu Chino Rumal goes the song’s famous refrain—parts of which were shot in the lake.

The song set the tone for what was to come. Today, hordes of people with movie cameras are seen competing to reserve the best spot to shoot their music videos or films. The crew negotiate with other crews while the cast waits on, observing the lake. The site resounds with Nepali tunes played out on loudspeakers, this time of the year, with Teej songs.

But Surkhet is not just about the famed Bulbule, obviously. The district is equally popular, at least among its locals, for sites of historical, religious and archaeological importance.

Listed below are five such sites that you should visit when you’re in Surkhet. There was a time when Deuti Bajai temple would be busy only on Mondays and Tuesdays. But today, this temple, built by King Yash Malla, receives over a 100 pilgrims every day. “It’s because it’s close to Birendranagar. The temple welcomes more visitors today than ever,” says Saraswati Raji, one of the priests in the temple. “Visitors come mostly from six in the morning to one in the afternoon.” The number of visitors increases during Hindu festivals, with Hindus pouring in with sacrificial goats and pigeons. Many Hindus believe that Deuti Bajai, the goddess, fulfils one’s wishes. Anyone visiting Surkhet, irrespective of their religion, should definitely visit the temple.

Kakre Bihar is the second-largest and oldest bihar in the country, after Lumbini. Enclosed by dense forests of saal and salla from all sides, it has an exotic location—a stark white monument in the wilderness of resplendent green. Kakre Bihar is just about a half-hour’s walk from Mangalgadhi in Birendranagar. Constructed by Ashok Malla, a khas king from Jumla, Kakre Bihar was partially damaged during the earthquake of 1934. It took a long, long time for renovation to begin, and work in earnest only began recently. Kakre Bihar is a melting pot of cultures and religions, worshipped with equal ardour by Hindus, Buddhists and people from other religions. It’s because the Malla king who built it was religiously liberal, say locals. There is the Buddhist bihar, but there are also statues of Shiva, Parbati and Saraswati, the venerated Hindu deities. 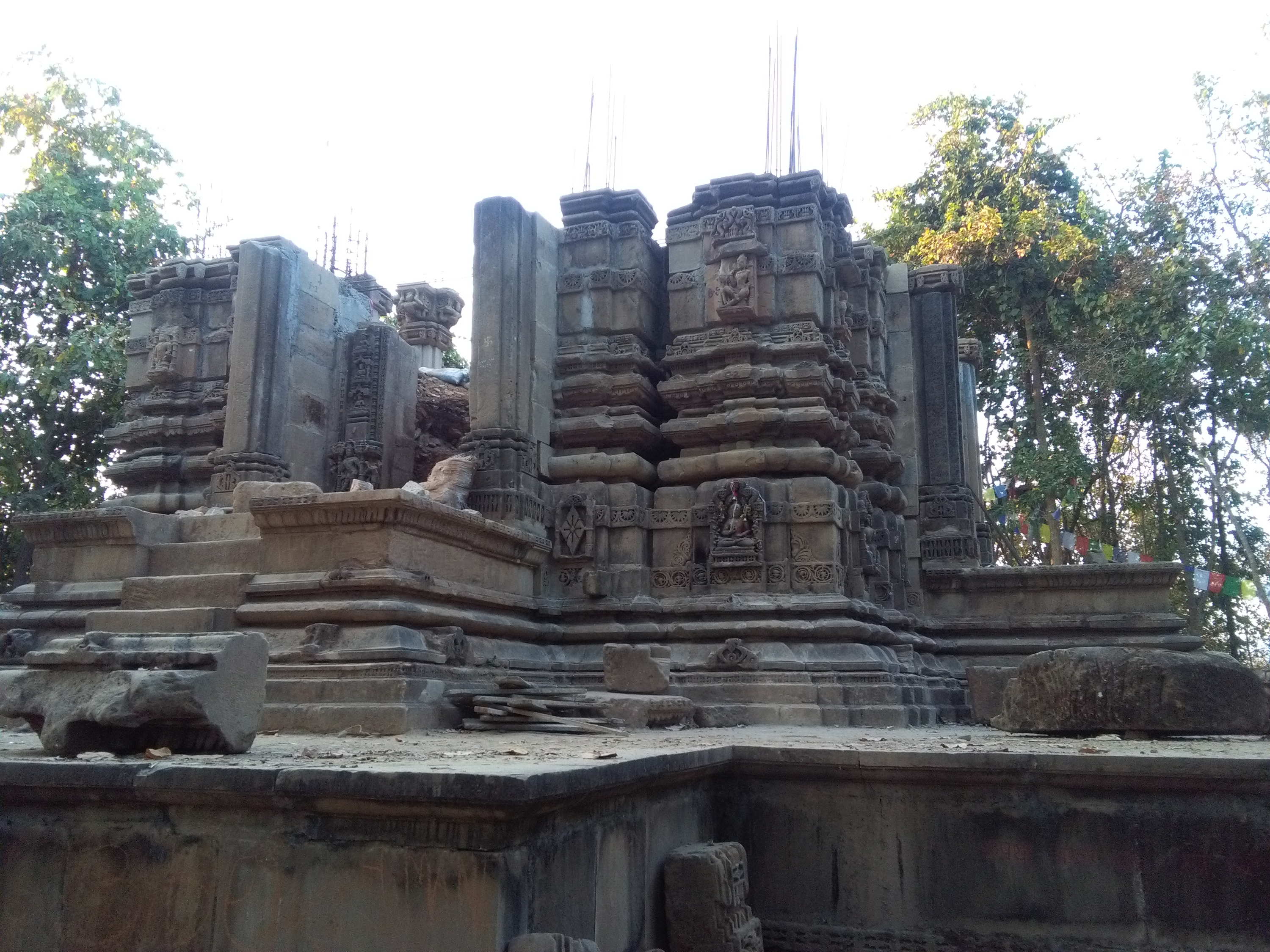 Kakre Bihar is the second-largest and oldest bihar in the country, after Lumbini. Photo Courtesy: PRADEEP 65110/CC-BY-SA4.0

The renovation is underway and the ward office has appointed soldiers to take care of the surrounding jungle, which is being illicitly cut down and encroached upon. For this purpose and to renovate Kakre Bihar, the Ministry of Industry, Tourism and Environment has allocated Rs 40 million budget this fiscal year.

The lake has inspired a plethora of song, dating as far back as the 70s when Surkhet Bulbul Taal, Maya Mai Sani Hunale Chhutyo Maya Jaal was released via Radio Nepal. The reason is obvious. It’s attractive, it’s turquoise water a literal oasis amid the heat that Surkhet can experience during summer.

The premise of the lake also has a park and a garden, which lures the movie and video makers. The lake is spread over 30 bigha area and, recently, a boating service was launched in the lake, another feather to its already illustrious hat. Moreover, the Surkhet Valley City Development Committee has come up with a Bulbule Area Development Master Plan and Dev Kumar Subedi, mayor of Birendranagar Municipality, has high hopes. “In a few years, there will come a situation when people will queue up in line just to get a ticket to visit Bulbule,” claimed Subedi. “We are soon doubling the area of the lake and its compound. Once the area is doubled, there will be not just a couple but seven rafts, sailing their way across the breezy lake.” The lake is spread over 30 bigha area and, recently, a boating service was launched in the lake. Kalendra Sejuwal/TKP

Gothikanda provides a safe haven to escape Surkhet’s sweltering summer heat. Resting on a steep hill, Gothikanda is cool, lush, vibrant. It makes for a perfect vantage point to view all of sprawling Surkhet Valley, and almost all of the districts in the Karnali. Gothikanda is getting developed by the day. Big resorts have been built, spawning a sort of a mini marketplace. It is popular for organic produce from vegetables to fruits. You have to make a half-hour’s trek uphill to reach Gothikanda from the district headquarters of Birendranagar. Along the trail, you will see hamlets faraway set up along the steep hills, making for a stunning view. Up north from Gothikanda, there are jungles and nothing else.

Baraha Lake and its mysterious Jalchara

Trapped between the dense forests, Baraha Lake is famous for a species of aquatic birds with no wings—locally called Jalchara; locals have been requesting authorities to research on just what kind of birds they are. Though not as vast as Bulbule, the lake is expansive nonetheless, covering a total of 16 bigha area. It is just some 20 kilometres from Birendranagar. Locals, however, complain that even though the lake holds extensive tourism potential, it’s lagging behind, shadowed by Bulbule, and also because of the lack of motorable road, proper maintenance and sanitation. “If further neglected, the lake may dry itself, who knows,” warned Tej Bahadur Basnet, chief of the Barahatal Rural Municipality. But Basnet assured that the Rural Municipality is coming up with a master plan to preserve the lake, committed to developing it as one of Surkhet’s crowning jewels.

Getting there: Kathmandu to Birendranagar via bus or plane. Auto-rickshaws are a popular means of transportation in Surkhet: one can get to all of the places listed above from five minutes to an hour on an auto-rickshaw.

Where to stay: There are several hotels of all kinds. But one is recommended to stay in Tharu homestays, run by the indigenous Tharu communities.

Detours: If one wants to extend the stay further, there are several other places one can opt to visit, from Panchakoshi in Dailekh, Rara, Sinja Valley in Jumla, Kubhinde Lake in Salyan, and Khalanga Durbar in Jajarkot.