To inculcate a reading habit among children and make them aware of their social environs, several Nepal-based organisations have focused on publishing children’s books that tell stories of the country’s diverse social realities.

In the grade one classroom of Shree Mahalaxmi Secondary School, a public school in Nakhipot, lots of children’s illustration books are stacked on a bookshelf. What makes these books unique from other children's books commonly available in Nepal are that they delve into stories about the country's diverse social realities and not fantasy stories. The characters in these books and plotlines are completely different.

On the other side of Kathmandu, Priya Joshi, an entrepreneur, lets her four-year-old daughter, Kaabya, go through children's illustration books published internationally and locally. The characters and storylines of the books are worlds apart from the fairy tales Joshi’s generation grew up reading.

“There is a saying, you become what you see. From books, TV programmes, photos to illustrations, I try to make sure that the contents my child consumes are diverse, inclusive, and relatable,” says Joshi.

In the last few years, parents and schools have been increasingly relying on children's books covering social issues to inculcate a reading habit among children and make them more aware of diverse social realities.

Room to Read Nepal is one of the first organisations in the country to publish children's illustration books that address various social issues.

In Nepal, where reading books that aren't relevant to one’s academics is still considered a waste of time, Room to Read Nepal aims to motivate children to develop a reading habit with its children's illustration books.

“Our academic curriculum is entirely theory-based, and this limits the exposure our children get. We try to fill in the gap with children's literature that gives a comprehensive understanding about life and the world they live in,” says Ananta Wagle, Book Publishing Officer at Room to Read Nepal.

In the same quest of making children understand themselves and the society they are part of, Srijanalaya, a nonprofit organisation, recently published six children’s illustration books centralised on the experiences of caste-based differences from the indigenous communities.

Another organisation that recently got into children's literature is British Council Nepal. About a year ago, British Council Nepal, in collaboration with Room to Read Nepal, UNICEF Nepal and Virangana Comics, published children’s illustration books that explored important subject matters like mental health and gender roles.

By educating and informing children about social issues, children literature today acts as a catalyst for social change.

In her book ‘Utsukta’, which is one of the six children's illustration books published by Srijanalaya, writer Sarita Pariyar delves deeper into intergenerational lived experiences of a Dalit family through the help of the book's main character.

These modern children's books are not only different when it comes to stories or plots. Even the illustrations used in these children books are diverse and inclusive. The characters in these books have diverse skin tones and facial features and are clothed in various attires representing different communities.

“When young children read and view such books where they and their problems are represented, they may refer to the book and try to adopt the books' characters actions when solving similar kinds of problems,” says Neeti Shrestha, illustrator for ‘Exemplary Sita’, one of the books published under the initiative of the British Council Nepal.

In her personal comic works, too, Shrestha, through her own lived experiences, touches on emotions such as anxiety and alienation. Her aim, she says, is to provide children with the tools to deal with such feelings.

A challenge that writers and illustrators of such children's books face is simplifying these complex subject matters and making them comprehensible to children. Some organisations like the British Council Nepal have reached out to children to write stories for its children’s books projects.

With ‘In Our Own Words’ series, an initiative by the British Council Nepal, the children's stories are all written by children for children. “Since the series' stories all came from the lived experiences of 12-year-olds and 14-year-olds, it became easier for children to relate to the stories," says Nischal Oli, Head of Arts at British Council Nepal. "By using illustrations and visuals, it becomes easier for children to understand stories and the issues these stories deal with."

As a children’s book writer, Pariyar says the most significant challenge she faces is simplifying complex social issues and making them enjoyable enough for children to want to read them.

“As an adult, we already have our own biases, good and bad, when it comes to a lot of these social issues. And as an illustrator and a storyteller, it was quite challenging for me not to let my own biases and stereotypes reflect on my children's book," says Shrestha.

After coming up with such literature, making the books accessible and available for the children is equally important to foster the change the organisations have been advocating for. 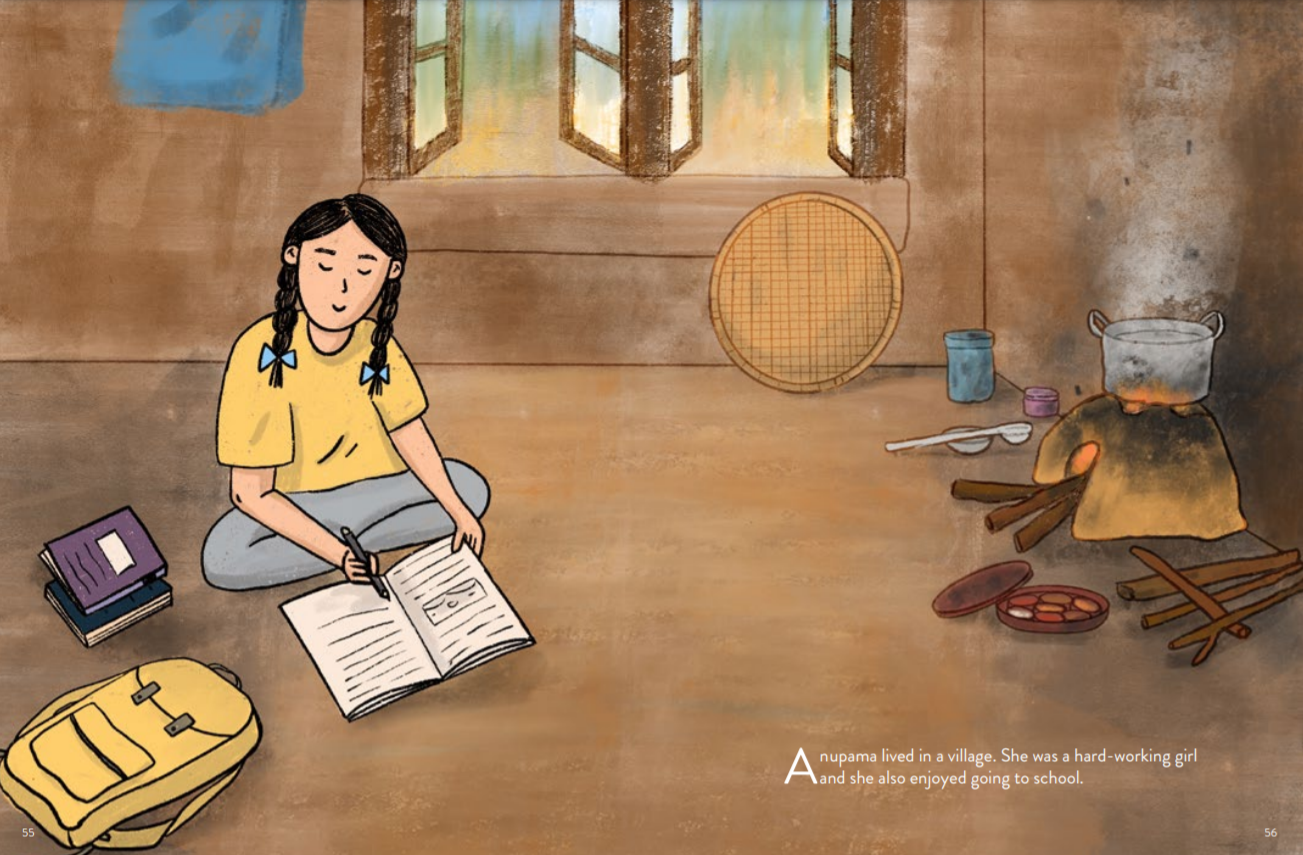 A page from the story ‘Anupama’ from the book ‘Heroine’. The book is part of the ‘In Our Own Words’ series, an initiative by Nepal's British Council. Photo Courtesy: British Council Nepal

Many of these organisations have made these books available, both in Nepali and English, at government schools across Nepal.

British Council Nepal has also distributed 30,000 copies to government schools, and has also made digital copies of the books available for download for free.

While children in many remote parts of the country still may not have access to books that tell diverse and relatable stories, the same is not the case with urban children. And parents like Joshi believe that their children are fortunate to have access to such books.

“Not only are these children's illustration books fun to read and go through, but they also have the power to instil in children a social conscience and make them aware of our society's dynamics," believes Joshi. "For example, the rigid gender structure is something that was enforced on us by our patriarchal society. But by making children aware of these social constructs with the help of children's books, we can create a safe, accepting, and progressive world for the next generation."or the next generation."

Reflections on politics and society