Here’s what happens on each day of Indra Jatra

Walk the routes of the divine and relive old Kathmandu. On Friday morning, journalist Sabina Shrestha posted a tweet accompanied by a short clip that shows a woman guarding a long wooden log beside a pavement.

In the video, some pedestrians try to walk over the log but the woman prevents them from doing so. She even has a stick in her hand, which she uses to warn and gesture at pedestrians to use an alternative way.

The wooden log, called Ya Sin in Nepal Bhasa, is worshipped during Yenya (Indra Jatra) after it is erected outside Hanuman Dhoka Palace amidst a ritual that marks the beginning of Kathmandu’s biggest festival. Ya Sin travels to Hanuman Dhoka from a forest in Suryabinayak, Bhaktapur, called Lingo Guthi Community Forest--formerly known as Nala Ban.

Dragging the giant wooden log more than 20 kilometres is only one part of the preparation for the eight-day festival, which marks the onset of winter--as the legend goes--is a gift to the King of Kathmandu by the goddess Dangi herself, for releasing her son Lord Indra from his custody. Lord Indra’s crime was that he had stolen a Parijat flower from the mortal king's garden.

As fascinating as the myth behind the celebration of the biggest festival in Kathmandu is, the festival is as enchanting--providing people with a chance to relish in a trance of revere, music and feast. It can be a surreal experience: to witness huge piles of ‘samay baji’--generally consisting of chiura (beaten rice), sliced ginger, bhatmas (fried dried soybeans), black-eyed peas curry, spiced and sautéed spinach, fried boiled eggs, spiced potatoes, bamboo shoot curry, and bara--decorated at different junctions around the city, and people struggling through a horde of crowd to get a taste of ‘thon’, a traditional Newar beer that gushes out of Swet Bhairab’s mouth. Ya Sin is hoisted in front of Hanuman Dhoka to mark the official beginning of the Indra Jatra festivities. Sanjog Manandhar/TKP

Although the Kumari, the living goddess, touring the city in her chariot is the most popular attraction of the festival, there are more than a dozen other masked gods and goddess that take to the streets. Apart from chariots of Ganesh, Bhairav and Kumari, which are manually pulled by the locals around the different parts of the city, Dangi, Majipa Lakhey, and Pulukishi also make their annual appearances.

According to legend, Pulukishi--the white elephant--is Indra’s vehicle, who rampages through the streets of Kathmandu in search of Lord Indra after he is taken prisoner by the mortal king’s guards. Majipa Lakhey, the demon-deity, on the other hand, is regarded as the protector of children of Majipat.

“I was told that six different groups travel from Bhaktapur to Kathmandu to perform Dya Pyakha--the dance of divine,” says Abhas Rajopadhayay, a native of Kathmandu.

The vibrant celebration of the festival, however, follows a disciplined and organised ritual: each divine entity has a specific time and route they follow throughout the festival while different guthis within the Newar community are responsible for the execution.

When the festival begins, many percussion assemblies playing traditional Newar instruments walk through the city while parading alongside the many gods and goddesses. Among the series of tableaux travelling in between the overcrowded streets, it is easy to get lost in the festivities and somehow missing the major events. Here’s the itinerary for the eight-day festival for this year:

Hoisting Ya Sin: The beginning of the week-long affair After the two-day journey from the forest in Suryabinayak, the wooden log reaches Bhotahity. On the day of Ashtami--usually three days before the festival commences--at an auspicious time marked prior by the priests, the log is pulled inside the core city and remains in Hanuman Dhoka until the day of Dwadashi--the first day of Yenya.

“The Chansa Sayamis are responsible for hoisting the pole,” says Gajendra Manandhar, secretary of Manandhar Sangh, the organisation responsible for all rituals regarding Ya Sin. “When the pole stands upright in front of Hanuman Dhoka, the festivities officially begin.”

Although Indra Dhwaj is usually erected in the early hours of the initial day of the festival, the festive mood is set only in the evening when people tour the old city through the Upaku route. This year, the first day of the festival is on September 10.

“On this day, Majipa Lakhey leads the procession from his abode at Majipat to Hanuman Dhoka, and then takes the Upaku route,” says Rajopadhyay. “All the other Dya Pyakha processions and traditional percussion assemblies then follow the defined route.”

Upaku follows an elaborate trail through narrow alleys and lanes. The route, according to locals, represents the boundary of Kathmandu. The route is specifically taken by bereaved families, with members lighting lamps at different religious shrines in the memory of their deceased family members.

The communities that lie on the Upaku route also display masks of Bhairab, most of which are only put up for public view once a year. It is a rare opportunity to witness the unveiling of the masks which are otherwise kept for safekeeping by the respective guthis. This is regarded as the main day of Indra Jatra. It is the day when the heads of the state come to Hanuman Dhoka to pay respect to the Kumari and other gods and goddesses. It also marks the first of the three-day circumambulating of Ganesh, Bhairab and Kumari on their respective chariots through different routes of the core city of Kathmandu. This year, the day falls on September 13.

On the first day of the chariot pulling, also known as Kwoneyaa, the route starts from Kumari Chhe in Basantapur and travels towards the west to Maru tole. It then follows the path to Chikamuga, Jya Baha, then further south-east towards Lagan tole. Then, the path turns westward towards Brahma tole, and advances to Bhimsenthan through Hyumat, Jaisedewal and Kohity. After which, it returns to Kumari Chhe, through Bhimsenthan.

The procession of Dangi, Indra’s mother, also takes place on this day. The route for Dangi is different from the one taken by the living goddess. Similarly, Majipa Lakhey and Pulukishi also take their own routes--theirs depend on the invitation by different toles and do not follow any specific route. The second day of chariot pulling and fifth day of Yenya is celebrated similarly like Kwoneyaa, except the chariot travels to the northern part of the core city. The living goddess travels from her abode at Kumari Chhen to Tengal through Pyaphal, Yatkha, and Naradevi. From Tengal, the chariot turns eastwards towards Ason through Nyokha and Bangemuda before taking another turn towards south-west to Makhan through Indrachowk and travels back to Kumari Chhe through Swet Bhairab in Basantapur.

This year, Thaneyaa falls on September 14.

The next two days after Thaneyaa see a continuation of the festivities with other tableau taking the streets, but the chariot pulling of Ganesh, Bhairab and Kumari takes a rest until the last day of Yenya. 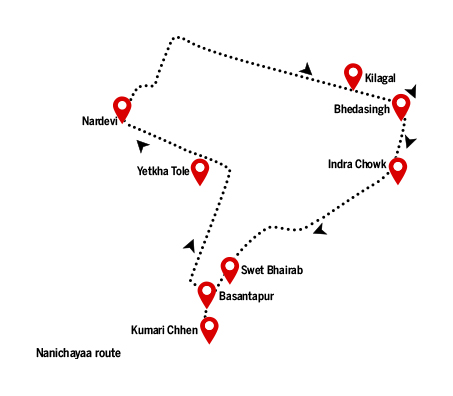 On the last day of Yenya, the chariots follow the same route as Thaneyaa, until they reach Naradevi, from where they take a detour. Instead of moving further north towards Tengal, it turns towards the east to Bhedasingh through Kilagal. From Bhedasingh, it takes the same route from Thaneyaa to Makhan, Indrachowk and back to Kumari Chhen.

To mark the end of the eight-day long festival, Indra Dhwaj, the wooden totem pole is then taken down. And as promised by goddess Dangi, the natives of Kathmandu prepare themselves for the forthcoming winter--after paying homage to the divine, the living, and the departed. This year, Yenya concludes on September 17.