Suspected rebels have attacked a hunting party of Gulf royals in the Pakistani province of Balochistan.

Suspected rebels have attacked a hunting party of Gulf royals in the Pakistani province of Balochistan.

The gunmen let the men off with a warning not to hunt in the area, after firing bullets into their vehicle, officials said.

No one was injured in Monday's attack near Panjgur town, which a separatist group said it carried out.

Hundreds protested in Balochistan on Tuesday against Arab hunting parties, which travel to Pakistan every year.

Farmers say the hunts endanger the birds and damage crops.

Pakistan issues dozens of permits every winter to the royal families of the Middle East to hunt rare Houbara bustards in its southern plains.

The princes and their wealthy friends consider the bird's meat to be an aphrodisiac.

The Supreme Court lifted a ban on hunting the birds earlier this year, after the government argued it helped build diplomatic relationships with Arab dignitaries. 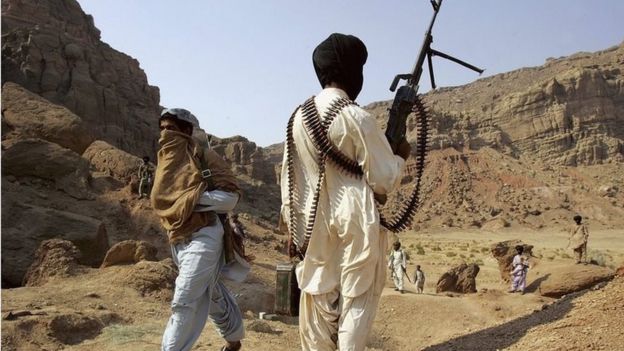 The shooting incident happened in the remote hilly tracts in Gichk area, some 90km (55 miles) south of Panjgur.

A local paramilitary official told the BBC the hunters led by Abu Dhabi's Prince Saif bin Zayd al-Nahyan had been in a convoy of about 30 sports utility vehicles.

In the early evening one of the vehicles had gone to check for nesting bustards at a spot about 5km away.

"Some men on motorbikes caught up with them, stopped the vehicle, asked the Arabs to get off, and then fired gunshots into the vehicle, shattering its windows and flattening its tyres," the official said.

Another local official said the hunters' vehicle had later been towed under escort to a nearby paramilitary Frontier Corps camp.

The Balochistan Liberation Front (BLF) said it carried out the attack.

"Our fighters let the sheikhs go unharmed in view of our ancient mutual links and values and in the hope that in future they won't obtain lease of any area of Balochistan for hunting from the occupying country, Pakistan," a statement said.

Last month the BLF warned Arab hunters not to move in the area with a Pakistani security escort.

The group claims to have carried out two similar warning attacks in Turbat region, south of Panjgur, this season, but there has been no independent confirmation of this.

In February 2013, at least two Frontier Corps personnel were injured when a hunting party of Arabs was shot in the Turbat area. The attack was claimed by the BLF.