Donald Trump has indicated he will ditch plans to find cash for his border wall in this week's spending bill.

Donald Trump has indicated he will ditch plans to find cash for his border wall in this week's spending bill.

The president's close adviser, Kellyanne Conway, said funding for the wall would be left out of a budget measure that must pass by Friday.

Building the wall, paid for by Mexico, was a key campaign promise.

Democrats had threatened to block the bill if money was earmarked for the wall, so its omission may now avert a government shutdown.

But the president insisted on Twitter that he still supported the wall and that it would be built.

He reportedly told a private meeting with members of the conservative media on Monday night that he might be open to funding the wall later in the year.

And Ms Conway confirmed to Fox News that the wall does not need to be funded this week, but remains a "very important priority".

Trump comes up against a wall

It was the centrepiece of the Trump election campaign. There was going to be a border wall, and at every rally he would shout out: "And who's going to pay for it?" And the crowd would roar back: "Mexico!" Except the Mexican government made clear there was no way it was going to fund it.

So when President Trump moved into the White House, he said that - initially - it might require US taxpayers to fund its construction, but the money would be clawed back from Mexico at a later stage.

Now with the president approaching his 100th day in office, he's come across another rock solid wall - the one presented by Democratic senators in opposition to his proposals.

They are able to block the spending proposals, and so the White House budget director will have to rewrite his plans - minus the funding for the border wall.

The president tweeted this morning: "Don't let the fake media tell you that I have changed my position on the WALL. It will get built and help stop drugs, human trafficking etc." 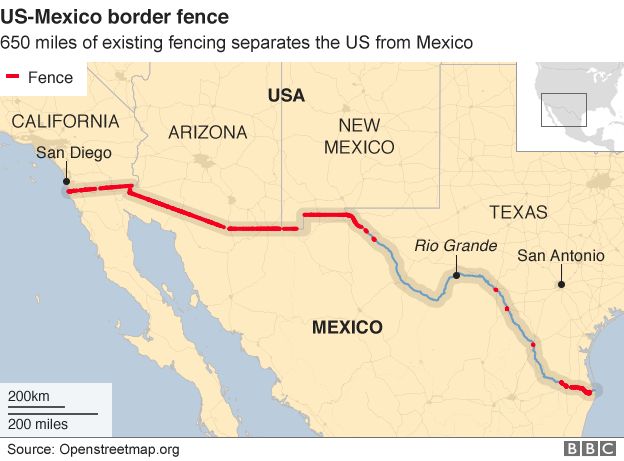 At some point in the future it may well get built, but this has been a stark lesson in the difference between campaigning and governing.

Mr Trump had proposed $1.5bn (£1.2bn) for his wall through Congress as part of the spending bill, which funds federal agencies to the end of the current fiscal year.

The plan has united Democrats in blanket opposition.

And some Republicans have balked at the estimated cost of $21.6bn - more than the price tag the president cited as $12bn.

Republicans with districts along the border have also been very critical, conscious that they have large Hispanic populations.

But the White House is insistent that the wall must be built, and will not concede there will be a "delay".

"Priorities have not changed," said spokesman Sean Spicer. "There will be a wall built.

It is important to prevent human trafficking, gangs like MS-13 from coming in, the flow of illegal drug and illegal immigration, he added.

Afghanistan ends search for survivors of earthquake that killed 1,000

‘Miracle on the Hudson’ pilot steps down from ICAO