In an unusual move, the entire US Senate is being called to the White House for a briefing on North Korea.

In an unusual move, the entire US Senate is being called to the White House for a briefing on North Korea.

Washington has become increasingly concerned at North Korean missile and nuclear tests and threats to its neighbours and the US.

The briefing, involving 100 senators as well as Secretary of State Rex Tillerson and Defence Secretary James Mattis, is being held on Wednesday.

China, North Korea's main ally, has called for restraint from all sides.

Mr Xi urged all parties to "maintain restraint and avoid actions that would increase tensions", according to the Chinese foreign ministry. 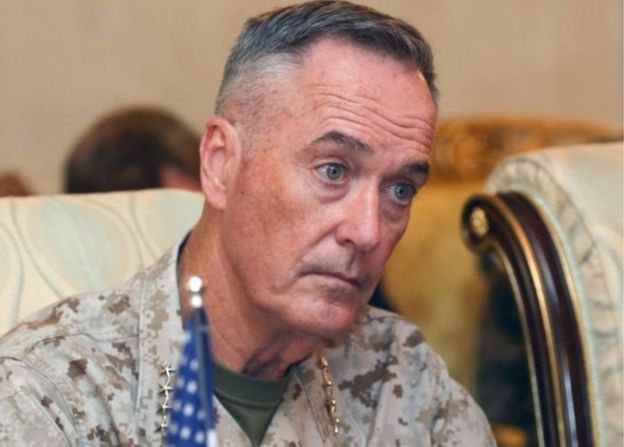 Chairman of the Joint Chiefs of Staff, Joseph Dunford, will be among those briefing the senators

White House officials regularly go to Congress to brief on national security matters, but it is unusual for the whole Senate to go to the White House.

Alongside Mr Tillerson and Gen Mattis will be National Intelligence Director Dan Coats and Gen Joseph Dunford, chairman of the Joint Chiefs of Staff.

Aides, quoted by Reuters, say the House of Representatives is seeking a similar briefing on North Korea.

Washington says a flotilla, led by the aircraft carrier USS Carl Vinson, is expected to arrive off the peninsula within days, despite conflicting messages last week on its exact whereabouts.

Mr Trump has also told United Nations Security Council ambassadors, meeting at the White House, that the UN must be ready to impose new sanctions on North Korea.

The US is pursuing a multi-pronged strategy to make its point on North Korea, the BBC's Gary O'Donoghue in Washington says.

First it wants the UN to tighten sanctions even further, and to ensure those in place are properly enforced.

Secondly, it is attempting to put fresh pressure on China to rein in its communist neighbour. The third aspect is the sending of an aircraft carrier to the Korean peninsula - making clear military action is an option. 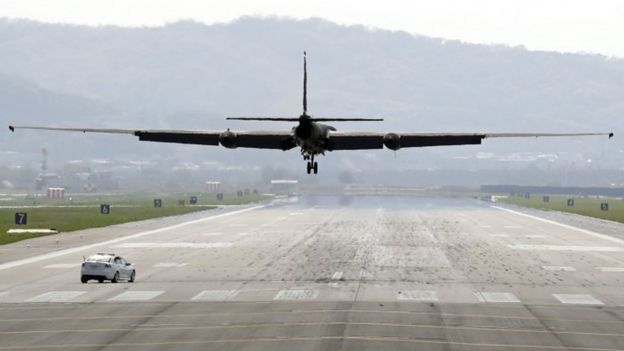 A US spy plane landing in South Korea: the US is closely monitoring activity in the North

North Korea has promised to press ahead with missile tests despite Mr Trump's warnings and experts say it may be preparing for another nuclear test, in defiance of UN resolutions.

However, a North Korean ballistic missile test on 16 April failed within seconds of launch, US experts said.

Washington is concerned that Pyongyang may develop the ability to place a nuclear bomb on a missile capable of reaching the US.

Beijing is worried about the possibility of all-out conflict on the peninsula, which could lead to the collapse of the North Korean regime under its mercurial leader Kim Jong-un.

China fears this could cause a sizeable refugee problem and lead to an American presence up to the Chinese border.

Timeline of recent tensions
8 April: The US military orders a navy strike group to move towards the Korean peninsula

11 April: North Korea says it will defend itself "by powerful force of arms"

16 April: North Korea conducts a rocket test, but it fails

18 April: It emerges the US Navy strike group was not heading towards North Korea when US officials suggested it was

22 April: US Vice-President Mike Pence says the group will arrive off the Korean peninsula "within days".

23 April: North Korea says it is "ready to sink" the US aircraft carrier

WHO meets to designate new variant, cautions against travel measures