Russian President Vladimir Putin has used crude language in a furious new attack on Turkey over the downing of a Russian combat jet last month.

Russian President Vladimir Putin has used crude language in a furious new attack on Turkey over the downing of a Russian combat jet last month.

The downing of the plane on the Syria-Turkey was a "hostile act" but Russia was "not the country" to run away, he said in his annual news conference.

He saw "no prospect" of ties improving with Turkey, which Russia has put under sanctions, under its current leaders. 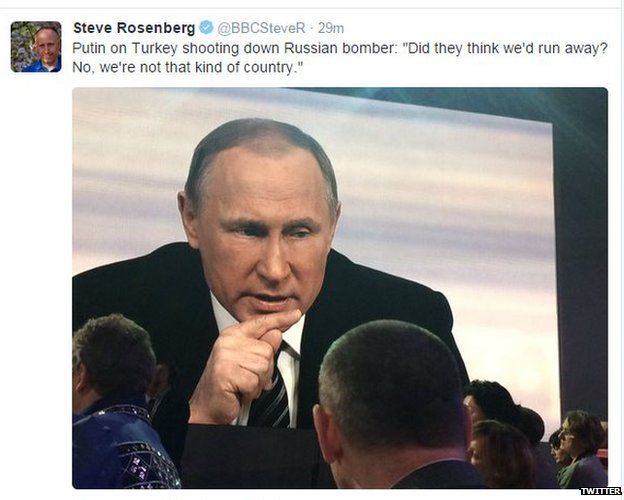 "The Turks", he said, had "decided to lick the Americans in a certain place".

Russia deployed its air force to Syria in September in support of President Bashar al-Assad and has been carrying out air strikes on his opponents.

Its intervention has been heavily criticised by Turkey, the US and Gulf Arab states.

Mr Putin is now into his third term as president since 2000, battling an economic crisis. Critics say civil liberties have been steadily eroded under his rule.

He remains one of the world's most recognisable politicians, and has topped the list of The World's Most Powerful People compiled by Forbes magazine for the third year running.

While oil prices had fallen sharply, he said, manufacturing had shown slight growth and there was a healthy trade balance in agriculture.

"Our economy depends on oil and gas prices, we expected Brent to be worth $100 dollars per barrel, but then it was 50, but this was an optimistic prediction too, our forecasts have to be amended again," Mr Putin said.

"GDP is falling, inflation is 12.3%, incomes, investment are falling too but the peak of the economic crisis is over."

While low oil prices and Western sanctions over Ukraine have hit the economy, foreign debt is low and the private sector is proving resourceful, according to a recent overview in The Economist.

Mr Putin is known for his marathon performances at his news conferences, where he frequently uses hard-hitting, colourful language.

In an interview with state TV on Wednesday evening, Kremlin spokesman Dmitry Peskov said Russia was a target in a "big information war [which] has been waged for a long time".

Indonesian plane crashes after take-off with 62 aboard

In attacking Oli, Dahal ratchets up incendiary rhetoric, only to draw flak

Migrant workers paid hefty sums for overseas jobs and returned. Now they are waiting for compensation for their losses